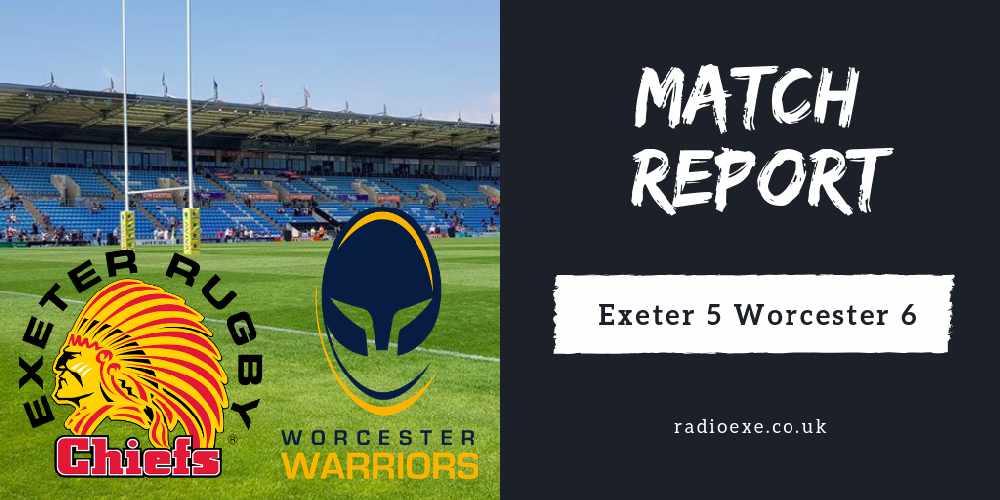 With recharged frontline players, the chiefs were looking to bounce back to winning ways in the league following an unexpected defeat against Newcastle Falcons last month. Before kick of commenced, 29 points separated top of the table Exeter to second bottom Worcester who have lost seven consecutive Premiership games.

After 20 minutes, no points were scored with no clear-cut chances created. Possession and territory wise, it was an even contest. It took a long waited 24 minutes for the first score. Kicking with a strong wind behind them, Worcester successfully kicked a penalty to give them a 3-point lead.

The frustration was building around Sandy Park as the home fans were somewhat shocked with their unusual home display. Littered with handling errors, the Chiefs couldn’t seem to keep the ball and work their way up the field.

It nearly got worse for the Champions. One minor error can change the complexion of the game, and a Chiefs handling mistake on half way nearly did just that. A mix up between the Exeter backs allowed Worcester to run straight through the heart of Exeter’s defence. Luckily, the pace of new boy Cordero, with the help of Don Armand, nicked the ball back to clear Exeter’s lines.

Eventually, the Chiefs built some rare momentum, winger Olly Woodburn was given the freedom to stretch his legs for the first time. However, the winger was halted a couple of meters short before the visitors turned the ball over.

To end the first half, Worcester, playing with the advantage, doubled their lead with another penalty kick in front of the posts.

An extremely uncommon sight to see. The Champions of English rugby, playing on home turf, scored no points in the first half.

Straight from kick off, Exeter’s Dave Ewers was penalised for taking the ball into contact. As a result, Worcester kicked for touch and soon found themselves just 5 meters short. Woodburn made a tremendous try saving tackle, however, with the advantage in Worcester’s favour, the visitors were awarded a penalty and opted to kick at goal. The attempted kick was caught up in the swirling wind and fell short.

The fans found their voices as Exeter launched their first attack of the half.

Chiefs prop Thomas Waldrom, who recently announced he will be leaving the club this season, broke through Worcester’s line of defence showing excellent footwork sidestepping his defender at pace. Agonisingly short, he was tackled by the defenders in pursuit.

On the back of his run, Exeter set camp inside Worcester’s 22 and won a penalty in front of the posts. Showing great confidence, Steenson kicked for the corner rather than taking the easy three points. It paid off. Sandy Park erupted as Mitch Lees powered his way over the line from a driven maul. Steenson hit the post with his attempted conversion - which proved a crucial miss.

With the clock counting down, Worcester were more than happy working the ball through the forwards maintaining possession. When Exeter finally turned the ball over, they had under 10 to score. But by that point, the fans had seen enough, hundreds left the ground early.