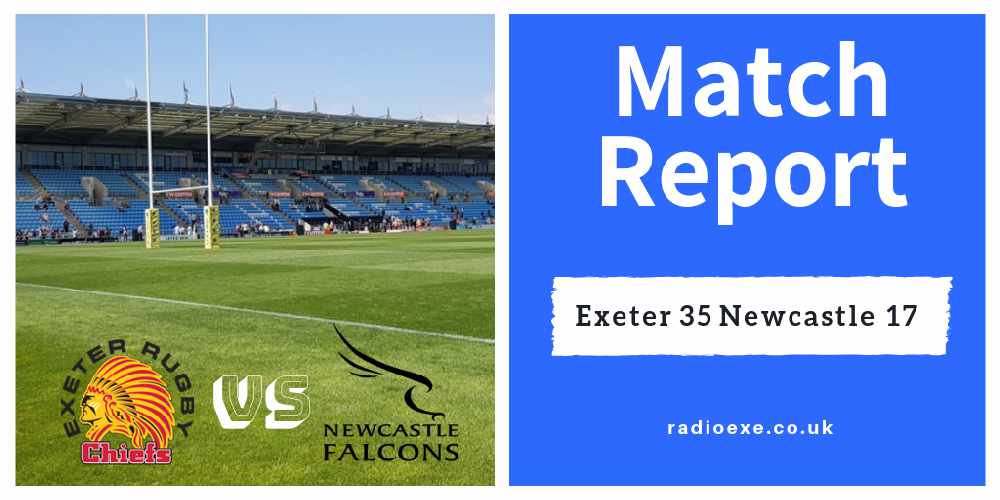 With Saracens losing against Gloucester on Friday – their third defeat of the season – Exeter took full advantage with a pulsating win against Newcastle to leapfrog the 2018 champions and regain top spot in the Gallagher Premiership.

Today's victory lifts Rob Baxter’s men four points clear of Sarries in what looks to be a two horse race.

The Chiefs made six changes to the side that lost last week - including the returning Olly Woodburn who featured on the wing.

If there were any early nerves at the prospect of exploiting a Saracens slip up, they were soon dispelled when, after an early bombardment, Chiefs took the lead.

Attacking down the left flank, Cuthbert powered his way through Newcastle’s defensive line with real determination. Moments before getting tackled, the 28-year-old released the ball to Santiago Coredeo who used his dancing feet exquisitely to side-step the final defender and score under the posts. Steenson with the extras.

The Chiefs maintained their dominance and deservedly scored their second try of the encounter.

Having spent long periods in the visitors 22, Jack Yeandle finally breached a stubborn defence after a couple of break downs. Steenson converted with the boot making it 14-0.

Surprisingly, Newcastle launched a rare attacked and benefited with seven points. However, any hopes of a comeback were slashed when Newcastle’s Welch was shown the yellow card for a deliberate knock-on.

Playing with the man advantage, Exeter carved open their oppositions defence once more. Starting for the first time since his injury, Woodburn celebrated his return in style after diving over in the corner for Exeter’s third try. From a tight angle, Steenson made it three from three with the boot.

With just over ten minutes played in the second-half, the all-important bonus point try was secured. Nic White touched down after good build up play to extend Exeter’s lead even further. Steenson eagle eyed with the boot.

Newcastle’s Zach Kibirige showcased a moment of individual excellence to run 30m and score in the corner to reduce the deficit. But the score didn't impact the game, as a rampant Exeter side continued to attack with real threat.

With 20 minutes to play, a fifth try for the home side was inevitable. Following sustained pressure and back-to-back penalties, Greg Holmes powered his way over the line from close range. Steenson maintained his 100% kicking accuracy with another successful conversion.

There was late drama at the death - Newcastle scored their third try thanks to another strong run from Kibirige. But it was too little to late. Exeter proved too strong as it finished: Exeter 35 Newcastle 17

It was a positive, rampant performance from the hosts and a much needed win taking them four points clear of second place Saracens. Up next, the Chiefs travel to Sale Sharks.