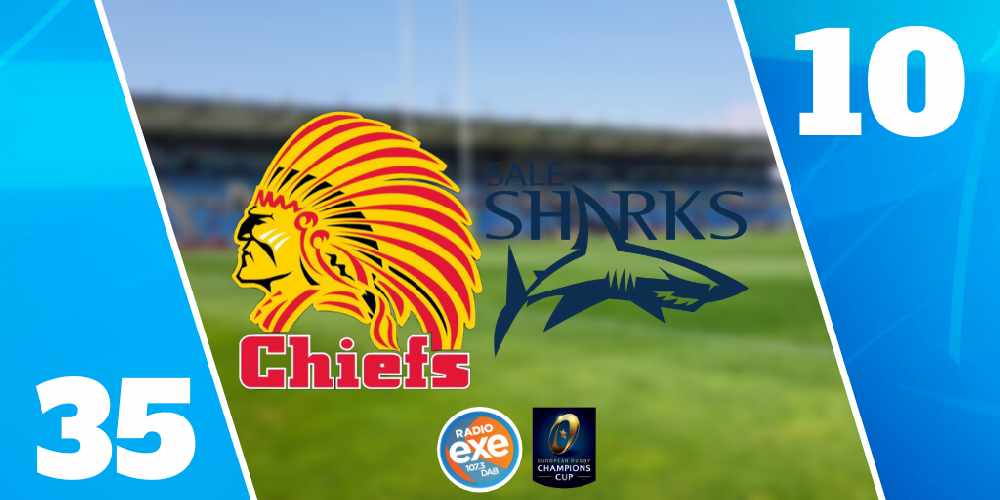 For the first time in Exeter Chiefs history, the Devon club have won their opening four games in the European Champions Cup. It’s their best-ever start to the competition – as they all but seal a place in the knockouts.

Sale Sharks were Exeter’s latest victim. Ben Moon celebrated an iconic landmark in the fixture – but it was the Simmonds brothers who ran the show and stole the headlines.

Sam and Joe Simmonds scored three converted tries between them before Ben Moon, making his 250th appearance for the club, scored a bonus point try. Jack Nowell added a fifth late on in a memorable afternoon at Sandy Park.

Exeter Chiefs director of rugby Rob Baxter didn’t make any changes to the side that beat Sale last weekend.

With the strong wind behind them in the first half, Sale didn’t capitalise. A few unforced errors cost them dearly as the visitors could only settle for three points with a penalty kick.

Exeter, knowing their kicking game couldn't be used to full effect, used their forwards effectively to gain territory. 20 minutes in, Sam Simmonds crashed over the line for Exeter’s first try following a five-minute bombardment. His younger brother Joe added the extras in front of the posts. It ended Exeter 7 Sale 3 at the break.

As expected, the former Premiership champions took full advantage of the wind in the second half and turned the game on its head.

Ten minutes in, Joe Simmonds scored another try following a long period of Exeter pressure. Soon after, his brother Sam was at the back of a driving maul to score another.

Against the run of play, Sale countered with a seven-point score. However, that’s as good as it got for the Sharks as they had to endure a battering in the later stages.

Making his 250th appearance for the club, Ben Moon scored the all-important bonus point try in the 70th minute before Jack Nowell scored a fifth late on.