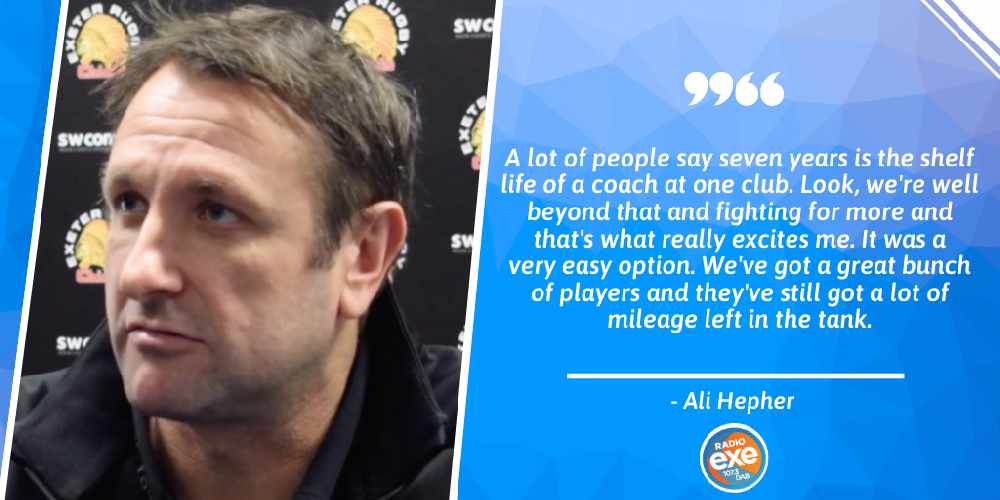 WATCH: Coaching staff to stay with Exeter until 2023

Exeter Chiefs director of rugby Rob Baxter - and coaching staff Ali Hepher, Ricky Pellow and Rob Hunter - have all signed three year deals with the club keeping them at Sandy Park until 2023.

Speaking to Radio Exe, head coach Ali Hepher said: "A lot of people say seven years is the shelf life of a coach at one club.

"Look, we're well beyond that and fighting for more and that's what really excites me. It was a very easy option. We've got a great bunch of players and they've still got a lot of mileage left in the tank."

Exeter Chiefs fly-half Gareth Steenson, who was part of the Championship winning team in 2010, was delighted to hear the news. "It's great," said the 35-year-old.

"They're the backbone of this club. Signing a new deal shows the commitment they have to the club. They're obviously seeing that we're heading in the right direction and there's lots more we can do and achieve here.

"At the minute, it's a very exciting place to be because of where we are in the league and European Champions Cup. It's fantastic."

Watch Ali Hepher and Chiefs fly-half Gareth Steenson react to the news in the short video below 👇 pic.twitter.com/bzEBZuNZ6x