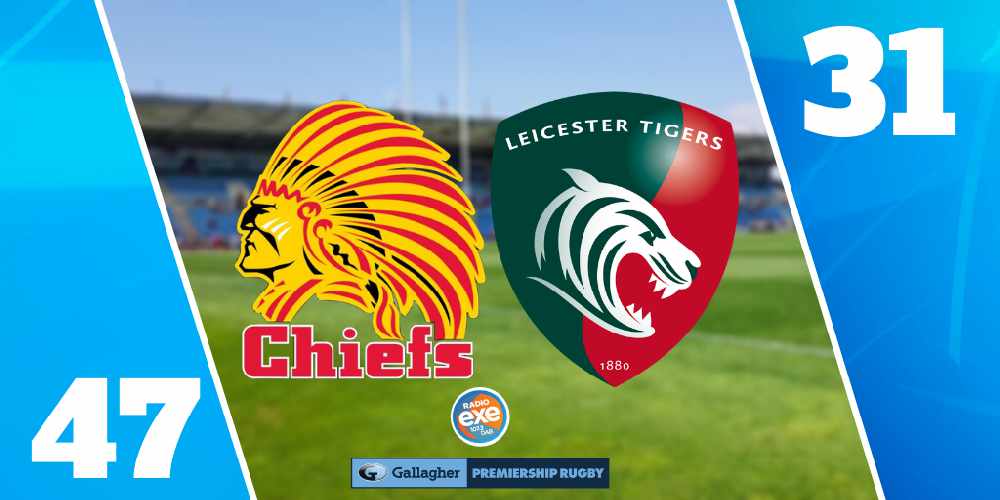 Chiefs close the gap between them and league leaders Bristol

Exeter Chiefs defeat an inform Leicester Tigers outfit 47-31 in a high scoring encounter at Sandy Park to close the gap between them and league leaders Bristol Bears to just two points.

An undisciplined Tigers side were the victims of their own downfall in the first half as Kobus Van Wyk received a red card for a high tackle on Chiefs’ scrum half Jack Maunder, who was fortunately unharmed after the illegal takedown, before Dan Kelly saw yellow.

The numerical advantage opened up space for Exeter’s backs to exploit – and it didn’t take them long to breach a weakened Tigers defence.

Moments after Harry Williams catapulted Exeter off to the perfect start with an early try, inform winger Tom O’Flaherty made a sublime 20-metre break before touching down in the corner for the second try of the afternoon, Simmonds slotted both conversions.

Another fine break from O’Flaherty resulted in Dave Ewers powering his way over from short range for the third – and the bonus point score was soon wrapped up on the half hour mark in exquisite fashion.

Sam Simmonds made another electric break out wide before off-loading the ball to Harvey Skinner, the Chiefs academy graduate caught the ball well before dotting down under the posts.

The European champions comfortably led 28-0 with less than ten minutes to go – but a determined Leicester side clawed some points back before the break. Two tries in quick succession put them into double figures, however, it was the hosts who convincingly led 28-12 at the break.

It didn’t take long for the double champions to extend their lead after the break; last season’s European player of the year Simmonds bagged his 13th try of the season after a chip over the top from his younger brother Joe.

Leicester’s Matt Scott and Charlie Clarke reduced the deficit once more with other try for the visitors giving them a glimmer of hope - but the returning Olly Woodburn slashed any hopes of a comeback with another fine touchdown in the corner.