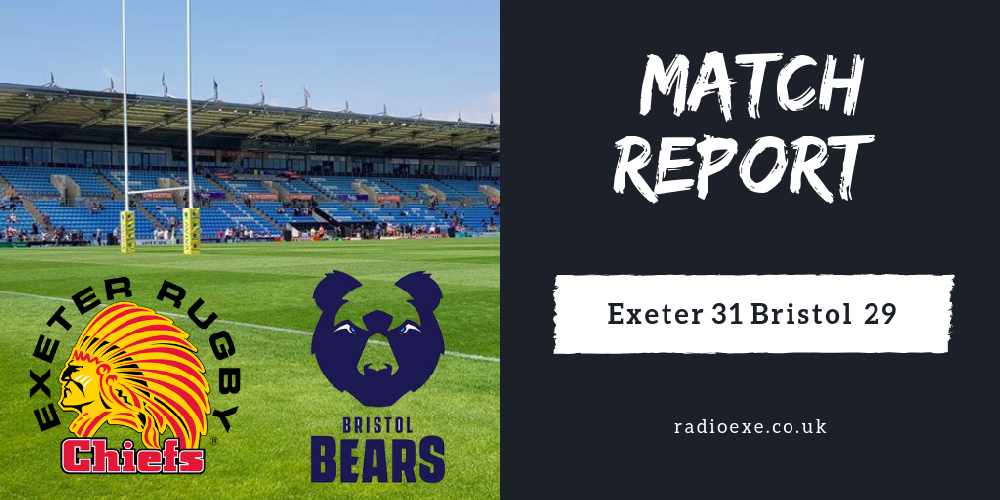 Exeter Chiefs returned to Gallagher Premiership action with a trip to newly promoted Bristol Bears, knowing that a bonus point win would see them return to the top of the league. With seven Chiefs international stars missing and numerous front-line players returning to action having been rested during the Premiership Cup campaign, this was always going to be a tough encounter in front of a passionate Bristolian crowd.

Despite an early close range try from Moray Low, the Chiefs soon found themselves reeling, with their usually resolute defence struggling to cope with Bristol’s free flowing attacking game. The Chiefs discipline let them down, meaning Bristol fly half Callum Sheedy was able to slot four penalties, leaving Bristol with a 12-7 lead.

Exeter were quick to reply, with Tom Lawday breaking through the middle of a driving maul unopposed, to bring them level in the 31st minute, but Gareth Steenson was unable to add the extras. Bristol’s star signing Charles Piutau gave Bristol the half time lead, when his quick thinking caught the Chiefs defence napping, as he powered through two Exeter defenders to dot down from a quick tap penalty. Callum Sheedy converted again, giving Bristol a deserved 19-12 lead at the break.

The second half started how the first ended, with the Bears applying all the pressure, leading to winger Luke Morahan eventually going over in the corner  and with the impressive Sheedy converting. However, the Chiefs who had looked very rusty throughout, started to show their resolve, with Santiago Cordero firstly finishing brilliantly in the 57thminute and then Jack Yeandle powering over from a well worked lineout move with just 10 minutes remaining, to bring the Chiefs to within two points.

After Sheedy extended Bristol’s lead to five with a further penalty in the 76thminute, the Chiefs exerted late pressure inside Bristol’s 22 to set up a thrilling finish. Mounting attack after attack, the Chiefs pushed the Bristol forwards over from a five-metre lineout. The referee showed no hesitation in awarding Exeter a penalty try and with it the victory, much to the fury of the passionate home crowd.

The relief on the Exeter coaches’ faces was obvious as they came away with all five points and with it a return to the top of the Premiership, on points difference over Saracens.

The Chiefs return to Sandy Park on Saturday to play hosts to Gloucester.