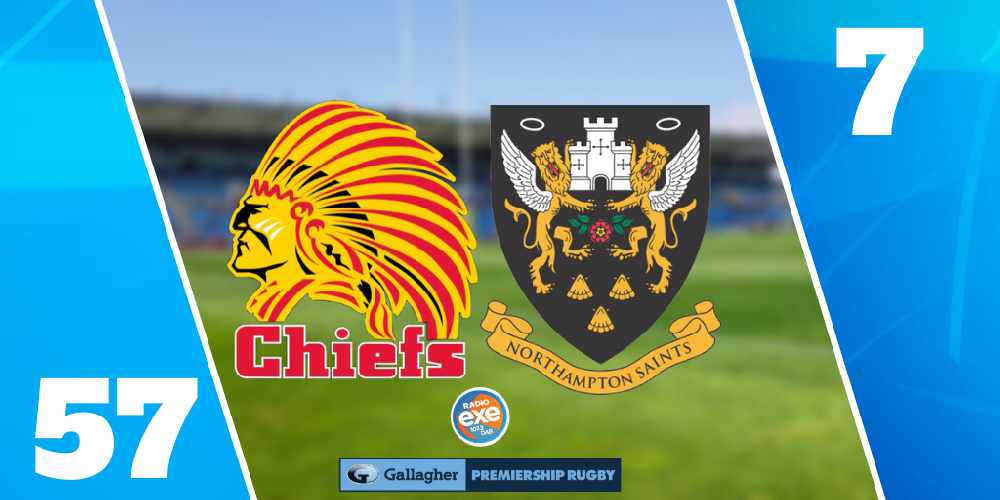 Exeter Chiefs secured their biggest win of the season this afternoon with a thumping eight-try victory against Northampton Saints.

Exeter march eight points clear at the top of the Gallagher Premiership. Northampton, who return to Sandy Park in April for the European Cup quarter final, drop to fourth.

Joe Simmonds slotted three points 10 minutes in. The young fly-half had another three-pointer opportunity soon after – but this time, he directed the ball just wide of the post.

The hosts marginally led 3-0 for half an hour – but in the final ten minutes of the half, the former Premiership champions were destructive. Exeter scored three tries and the first was the pick of the bunch.

Inside his own 22, Tom O’Flaherty made a magnificent break before eventually being brought down near the half-way line. Nic White threw a looping pass over two Saints defenders to set free Woodburn who made even more ground. Soon enough, they found themselves 5 meters out – and the forwards took over. Johnny Hill powered his way over the line from close range. Simmonds missed the extras.

Things got even worse for the Saints when Collins received a yellow card. With the man advantage, Elvis Taine and Jannes Kristen both crashed over the line. This time, Simmonds slotted both kicks.

The bonus point was wrapped up in the 50th minute thanks to a Tom Hendrickson solo try. Hendrickson exploited a gap in the heart of Northampton’s defence to touch down under the posts. Simmonds added the extras.

Less than five minutes later, Ben Moon was in on the act. The prop unexpectedly ran 15 metres before touching down for Exeter’s fifth try of the afternoon – converted by Simmonds.

Rob Baxter’s men weren’t resting on their laurels despite a gigantic lead. Hendrickson scored his second try of the afternoon from close range – and he needed to work extremely hard for it.

It took 70 minutes – but eventually, Saints scored some points. It was a converted try which only proved to be a consolation.

In the dying embers, Tom O’Flaherty ran in a seventh before Sam Simmonds dotted down an eight. Substitute Gareth Steenson brought up the half-century with two successful conversions.