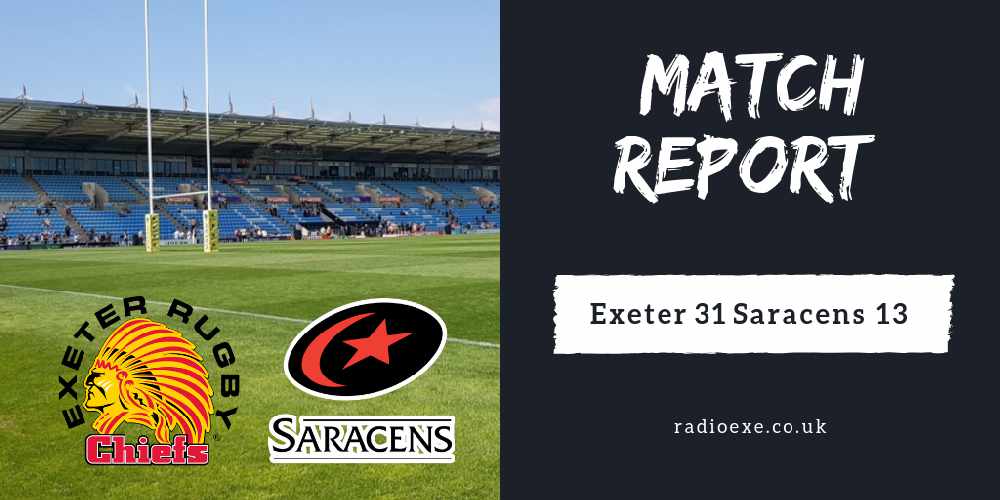 Exeter end Saracens unbeaten run, which has lasted over eight months, with a rampant performance in front of a sold out Sandy Park. But more importantly, the chiefs leapfrog Sarries to top the pile in the Gallagher Premiership heading into Christmas.

It was the first time the two teams met since May’s Premiership final at Twickenham. An encounter the chiefs remember vividly. This time out, the highly anticipated game really lived up to its expectations. And against a few odds, It was Exeter who came out triumphant.

The chiefs made just one change to the side that played Gloucester in the Heineken Cup last weekend, a game they crucially won 17-29. Former England international Matt kvesic replaced Tom Lawday.

It was a slow start for Exeter. However, having won a penalty inside their own half within two minutes, they had the chance to put Sarries under pressure early on. But Gareth Steenson’s kick didn’t find touch, and the visitors  punished them. England international Owen Farrell kicked two penalties to give his side a 6-0 lead in a convincing opening 15 minutes for Sarries.

It took the chiefs just under 20 minutes to find themselves deep inside Saracens 22 for the first time. Following mounted pressure and continuous phases 5 meters out, the chiefs won a penalty directly in front of the posts. Steenson didn’t opt for the easy three points, he wanted more, and got more. The chiefs lost the ball, but Sam Skinner was alert to charge down a clearance kick to gift Luke Cowan Dickie the first try of the game.  Extras added.

It doesn’t happen very often, but Saracens were making mistakes with a noticeable amount of dropped catches and knock-on’s – which led to more points for the 2017 Premiership champions.

With the last kick of the first-half, Steenson kept his cool to add three more points as it finished Exeter 10 Saracens 6 at half-time.

It was an incredibly entertaining second half, despite it being scoreless after 20 minutes of high intensity play. It was Exeter, however, who created the best chances.

The chiefs set up camp inside Sarries 22 for much of the half as Rob Baxter’s men pilled on the pressure. And in the space of five minutes, the hosts scored two tries in rapid succession to give them a healthy lead. Chiefs prop Harry Williams powered his way over the line before Exeter were awarded a penalty try as Sarries illegally took down the chiefs maul.

All of a sudden, with ten minutes to play, Exeter were chasing the bonus point try. And with the clock in the red zone, they got it! Matt Kevesic with the score on the back of a trademark dirving lineout as it finished Exeter 31 Saracens 13.

The win, Exeter’s ninth this season, leaves them top of the Premiership heading into Christmas.