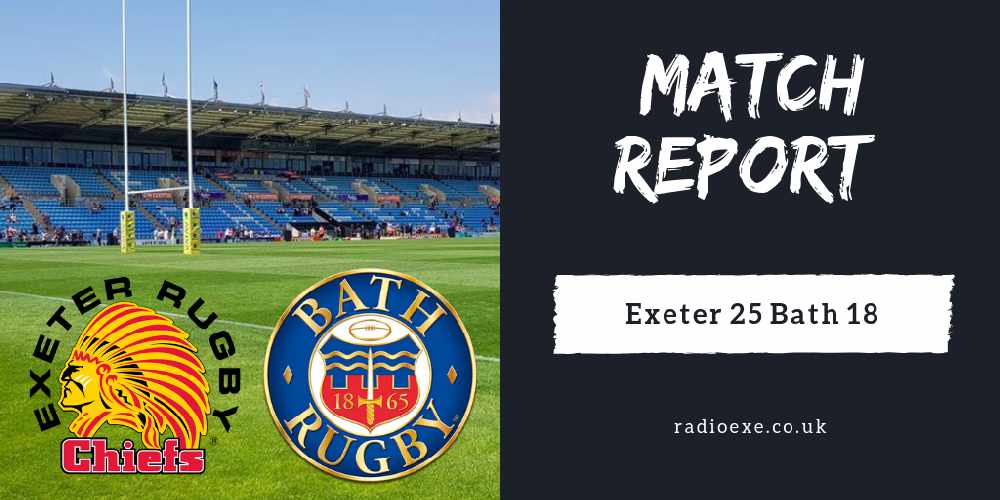 Exeter Chiefs beat westcountry rivals Bath in the Premiership Rugby Cup. It's their first win in the competition this season.

The Chiefs made a number of changes to the side that drew against Newcastle last week. Ollie Devoto, Joe Simmonds, James Short and Jack Maunder were brought into the fray.

Bath, who lost to Harlequins last week, kicked an early penalty to give them a three point lead.

But the Chiefs soon dominated a low-scoring opening half. In a period of 15 minutes, Exeter were awarded four successive penalties 5 meters out, a five metre srum and penalty advantage. A try was inevitable. And when they worked the ball out wide, after using the direct route with the forwards, James Short touched down in the corner. Simmonds narrowly missed with the conversion.

With the clock ticking, the two sides exchanged tries in the final 10 minutes. Exeter's Devoto sliced his way through the visitors defence to score under the posts. Simmonds with the extras. However, moments later, Bath scorerd their first try of the game following a driven lineout as it finished 12-8 at the break.

With the wind behind them in the second-half, Exeter couldn't have wished for a better start. An early penalty kick and converted try scored by Tom O'Flhatery extended their lead by 10 points.

However, as they did in the first-half, the visitors responded rapidly with a try of their own. In the swirling wind, yet another conversion was unsuccessful. But they scored another try soon after to make it 22-18.

It was a nervy ending for the Chiefs. But a late Harvey Skinner penalty ensured the win. It finished 25-18.

Man of the match: Jack Maunder