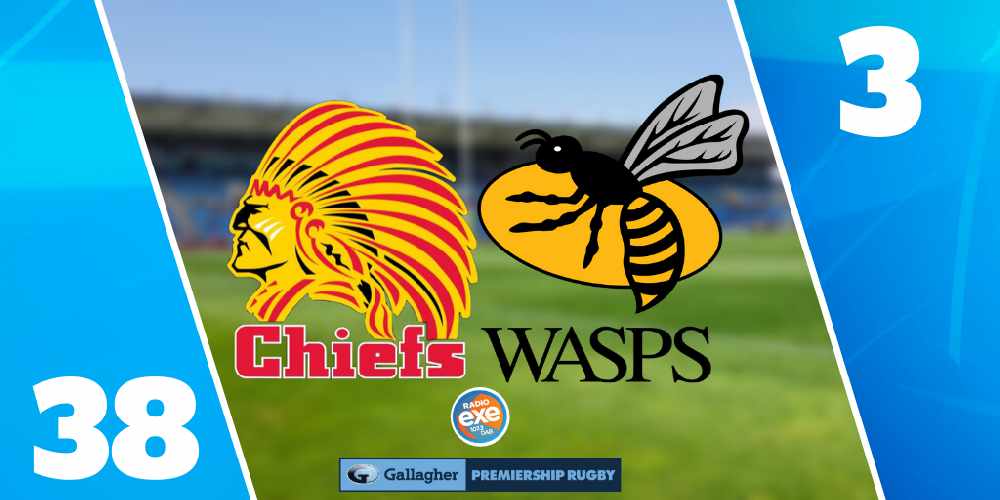 Despite making eight changes from last time out, the 2019 Premiership finalists emphatically beat Wasps In front of a record attendance at Sandy Park (13,320).

It’s Exeter’s first Premiership bonus point win of the season – and their third win on the bounce.

The tries came from Ben Moon, Luke Cowan-Dickie, man of the match Tom O’Flaherty and Alec Hepburn – a penalty try was also awarded - to wrap up the bonus point victory.

It was a much-needed confidence booster for the Chiefs having lost twice already this season in the Premiership. They climb into the top four.

Exeter Chiefs director of rugby Rob Baxter heavily rotated his squad with one eye on the European Cup game next weekend. He made eight changes in total from last time out –Gareth Steenson, Phil Dollman and Don Armand made their first starts of the season.

The cross wind swirling around Sandy Park played an instrumental part in helping Exeter score the opening try inside an end-to-opening 10 minutes.

A clearance kick from Wasps was caught up in the wind and the ball found touch inside their 22. Exeter’s lineout was strong, so was the maul. After a few phases, Ben Moon crashed over the line. Steenson kicked the extras.

The visitors bit back with a penalty, but soon after, Steenson returned the favour and extended Exeter’s narrow lead with another successful kick at goal

Wasps were left frustrated at the break – although they controlled the final stages of the seconds half and had three glorious chances from close range, the London club couldn’t capitalise. Chiefs weathered the storm well to maintain their seven-point lead at the break, courtesy of some heroic defending.

Chiefs made some changes after the break – bringing on Joe Simmonds and Alec Hepburn. The duo made instant impact.

Following a ten-metre line out, Chiefs formed an unstoppable maul – at the back of it was Luke Cowan-Dickie who dotted down for Exeter’s second try. From a tight angler, Steenson made no mistake with the extras.

Wasps started falling apart mid-way through the second half. Following an impressive five-minute bombardment five metres out, a yellow card was dished out to a Wasps player. Playing with the man advantage, Exeter were awarded a penalty try.

In a blink of an eye, Baxter’s men were chasing the bonus point score. Still playing with the man advantage, they got it. Winger Tom O’Flaherty broke through the middle, no one could match his electric pace, and he scored a try under the posts.

In the dying embers, Chiefs were running riot and managed to score a fifth try. Substitute Alec Hepburn got it from close range. Extras added.

A highly impressive second half from the Chiefs. It ended: Exeter 31 Wasps 3