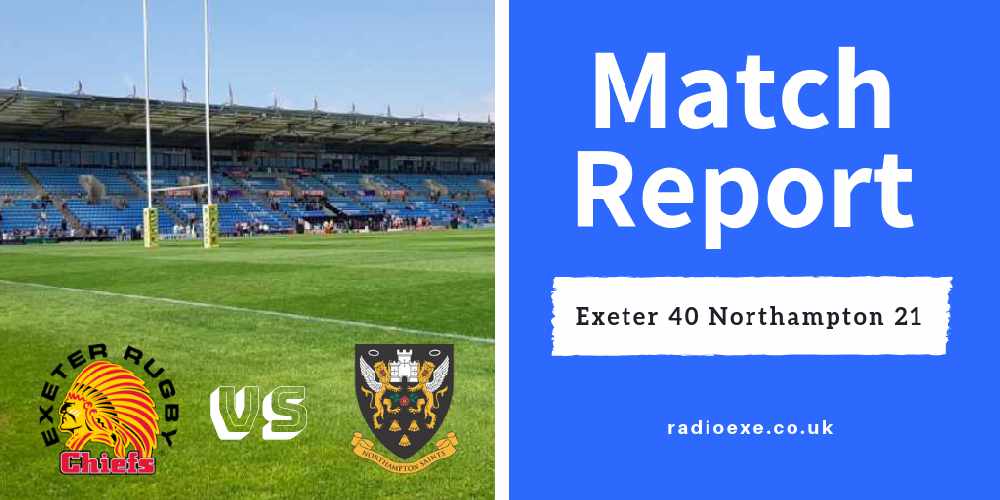 It’s been another impressive campaign for Devon’s finest – they’ve finished the 2018/19 season top of the pile with an incredible 86 points.

Exeter will be heading into their home semi-final next week full of confidence following a 40-21 victory against Northampton Saints this afternoon in front of a sold-out Sandy Park (12,911).

It was a hard fought contest, but 6 tries for the hosts, including one for Don Armand on his 100th Premiership appearance, was enough to bounce Exeter back to winning ways.

Despite the defeat for Northampton, they've just about done enough to claim the final semi-final spot, meaning the two sides will go head to head once more next week.

Rob Baxter has used the past month to rest his key players. But this time out, with the semi-final just one week away, the Chiefs were at full strength –  boosted with the return of England international Sam Simmonds who was named on the bench.

Needing a win to secure the final semi-final spot – the visitors came out the blocks rapidly and opened the scoring inside 2 minutes with a converted try.

"They've opened the box of fireworks in double quick time!"

The perfect start for Northampton. 😇 pic.twitter.com/XpL0XJwGpd

However, It didn’t take long for the league leaders to respond. Having built momentum inside Northampton’s 22, Ollie Devoto’s grubber kick bounced kindly into the hands of Henry Slade. After a slight juggle, the 26-year-old centre touched down under the posts with no defenders in front of him. Joe Simmonds with the extras.

Northampton were causing all sorts of problems with ball in hand. Eventually, after sustained pressure, the visitors deservedly got their second score following a fluid move. Hutch with the try.

It was a chaotic final 10 minutes – which was dominated by the hosts. Exeter went through the gears rapidly and finished the half like a juggernaut.

Setting camp deep inside Northampton territory, Exeter had several thrusts at the line and scored two fully deserved tries inside an action packed 5 minutes. Using the power of the forwards, Ben Moon and Don Armand bundled their way over – both scores well converted by Simmonds to give his side a 21-14 lead.

In the dying embers of the first half, TWO yellow cards were shown for the visitors with Exeter causing major issues just meters out. However, with seconds to play, a pass was intercepted from Reinach. The Northampton winger used his electric pace to run the whole length of the pitch and score under the posts.

It ended: Exeter 21 Northampton 21 at the break.

Playing with the two man advantage, the hosts took full advantage to regain their narrow lead. The attack was built on another accurate penalty kick into the corner by Slade. Following the line out, the Chiefs powered forward having formed an unstoppable maul – and at the back of it was Matt Kvesic who dived over in the corner. This time, Simmonds missed the target with the conversion.

With their tails sky high, Dave Dennis broke free for Exeter’s fifth try under the posts,  extending the lead to twelve points.

Coming off the bench, Luke Cowan-Dickie rounded off a fantastic, dominant second half display for the Chiefs with Exeter’s sixth try. Following relentless pressure, the forward burrowed over from short range. Simmonds made it 5/6 with the boot.

Failing to create any clear cut chances in the second half, unlike they did in the first,  Northampton failed to stage a comeback.