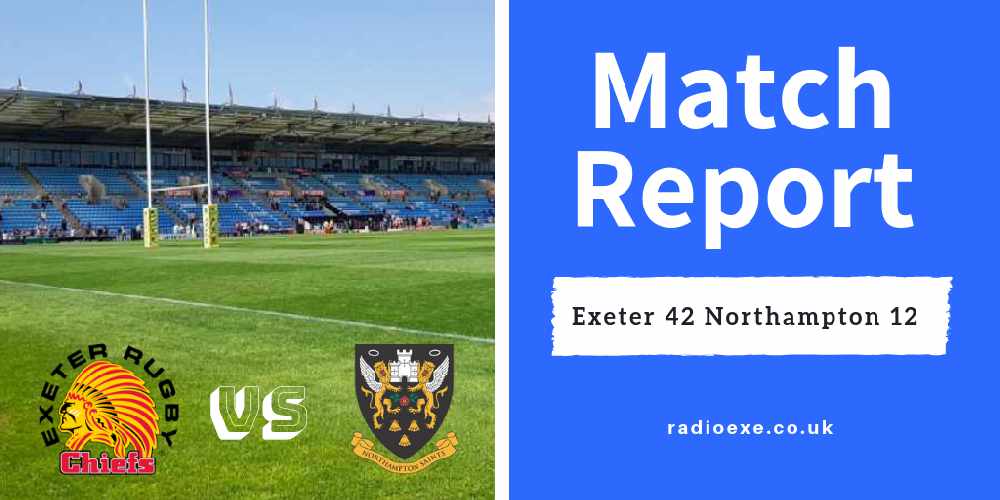 Exeter reach the Premiership Final for the fourth successive year

For the fourth successive season Exeter Chiefs will compete at Twickenham in the Premiership Final having beaten Northampton 42-12 in their home semi-final at Sandy Park.

Rob Baxter’s men will play defending champions Saracens – who toppled Gloucester 44-19 In their semi-final encounter earlier today – in the final on June 1st.

It’s the grand finale everyone wanted – the Premiership league leaders vs the European Champions. It’s poised fittingly for an entertaining showdown at the home of English rugby next week.

This time last week, a second half masterclass from the Chiefs cruised them to a convincing victory against Northampton. This time out, it was much the same.

Unsurprisingly, Rob Baxter didn’t make many changes to his side – just the two in fact. Tom O’Flaherty got the nod over Olly Woodburn on the wing, whilst on the bench, Alec Hepburn replaced Billy Keast.

In a lively opening 10 minutes to the game it was Exeter who pilled on the early pressure and enjoyed large parts of possession deep inside Northampton’s 22.

The visitors, firmly on the back foot, weathered the storm well for a lengthy amount of time -  but eventually after 20 minutes their defence was breached. Following a Chiefs 5 metre scrum, Harry Williams powered his way over the line like a juggernaut for the opening, fully deserved, score. Joe Simmonds kicked the extras.

Seconds later, a rampant Chiefs side doubled their lead thanks to the classy footwork of  Simmonds. The young fly-half swerved past his defender with ease before dotting the ball down under the posts. He kicked the extras too giving his side a 14-0 lead.

Joe Simmonds, that is GLORIOUS 🙌

The fly-half brings up @ExeterChiefs' second try of the afternoon in style 👏 pic.twitter.com/T1GQ0Euowf

It took half an hour, but Northampton finally caused Exeter’s defence some serious problems. Following a 5 minute bombardment -  the visitors turned the screw, and turned the encounter on its head.

Inside a chaotic 5 minutes the Chiefs conceded two tries and lost O’Flaherty – who was sin binned for an illegal foul. In a blink of an eye, against the run of play, Northampton reduced the deficit to just 2 points. Exeter were shook.

The Chiefs began the second half like they did in the first, within 10 minutes, they settled many nerves inside Sandy Park thanks to two tries from Dave Dennis and O’Flaherty.

The first try was another impressive move from the 2017 champions. Winning a penalty inside the 22, they opted for the lineout rather than kicking an easy three points – and it paid off. Using the power of the forwards, Dave Dennis crashed over the line.

As many fans were still celebrating, the hosts scored another in quick succession. O’Flaherty put his name in lights with a piece of individual excellence - the speedy winger used his pace and footwork exquisitely to score another incredible try. The 24-year-old exploited a gap in Northampton’s defence and ran 40 meters, skipping past two defenders, to touch down under the posts. Simmonds added the extras.

The @ExeterChiefs winger races away to give the hosts some daylight!

Rob Baxter’s men suffered a slight set back midway through the second half when England International Henry Slade worryingly limped off the pitch with what was thought to be a hamstring injury.

The Chiefs dominated the latter stages of the second half – and their hard work paid off. Coming off the bench, Sam Simmonds all but secured the win with Exeter’s fifth try from short range. His brother, Joe, added the extras once more extending the lead to 25 points with less than 10 minutes to play.