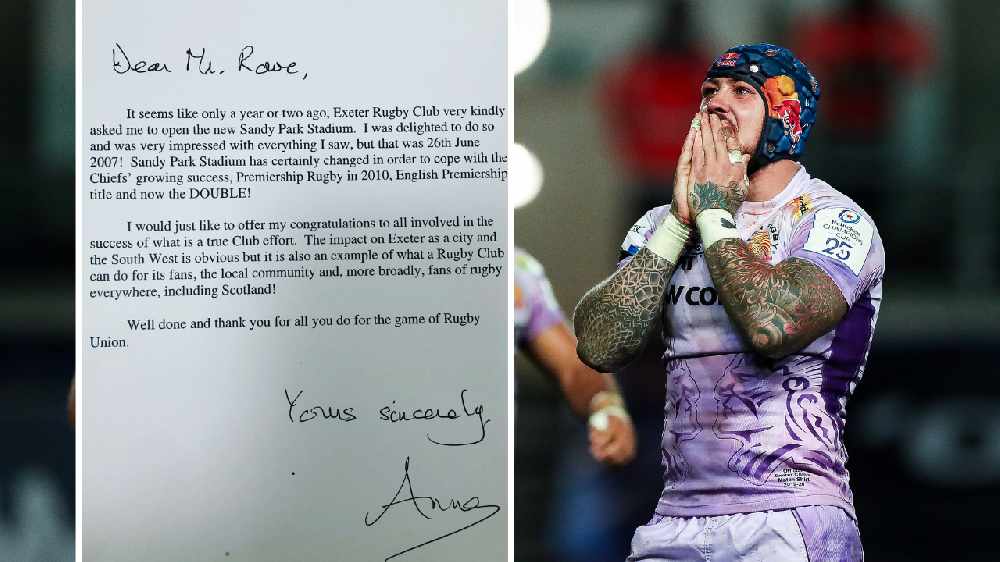 Her Royal Highness Princess Anne has written a congratulatory letter to Exeter Chiefs after the club famously won the domestic and European double.

In a personal letter to club chairman Tony Rowe, the Princess Royal said: “It seems like only a year or two ago, Exeter Rugby Club very kindly asked me to open the new Sandy Park Stadium. I was delighted to do so and was very impressed with everything I saw, but that was 26th June 2007!

“Sandy Park Stadium has certainly changed in order to cope with the Chiefs’ growing success, Premiership Rugby in 2010, English Premiership title and now the DOUBLE!

“I would just like to offer my congratulations to all involved in the success of what is a true club effort. The impact on Exeter as a city and the South West is obvious, but it also an example of what a Rugby Club can do for its fans, the local community and, more broadly, fans of rugby everywhere, including Scotland!

“Well done and thank you for all you do for the game of Rugby Union.”

Mr Rowe was delighted to receive the letter, adding: “As a club we were honoured to have received this letter from Her Royal Highness, the Princess Royal. As she rightly pointed out, she officially opened Sandy Park back in 2007.

“I know she has a great interest in rugby union, particularly Scottish Rugby, and with a number of their internationals now plying their trade with the Chiefs, I am sure she will have an even greater interest in our fortunes.”