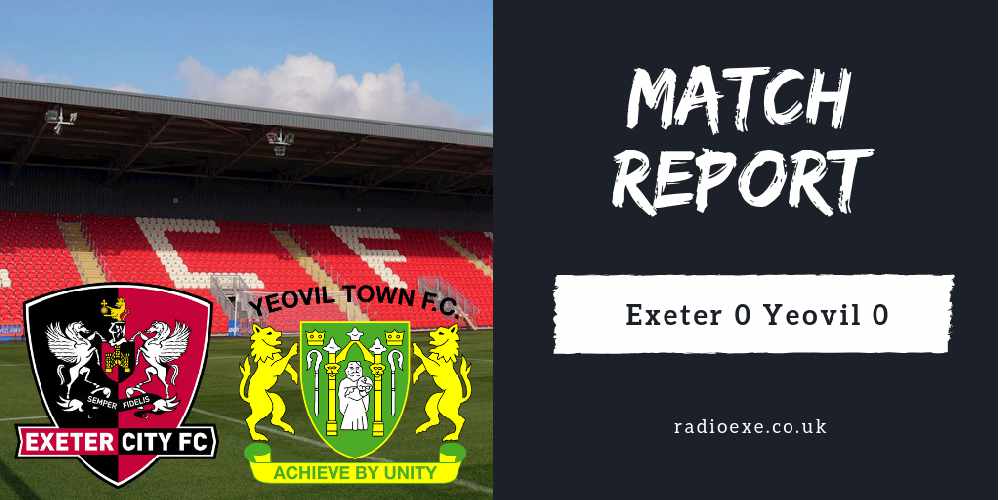 Hiram Boateng rattled the crossbar for City in the first-half.

Exeter City welcomed west country rivals Yeovil Town to St James Park knowing a win would see them level on points with fifth place Mansfield. Down the other end of the table, victory for Yeovil, who are currently struggling in 17th place, would lift them 11 points clear of the relegation zone.

However, despite the 21-point difference between the two sides, Exeter are winless in four matches against Yeovil in all competitions. The visitors have also beaten Exeter twice this season already, 3-1 in the league and 3-1 in the Football League trophy.

Exeter’s manager Paul Tisdale, who will be seeking vengeance against the Glovers, had no option but to readjust his side that drew 1-1 with Carlisle United last weekend. Captain Jordan Moore Taylor and winger Lee Holmes both gingerly limped off early in the first-half with injuries – the full extent of damage is yet to be confirmed. In the meantime, they are replaced tonight by Craig Woodman and Matt Jay. Jay, injecting pace into the team, will partner Jayden Stockely upfront who was isolated against Carlisle last weekend.

Under the floodlights on a mild evening, City dominated the entire first-half and created several good chances to take the lead. Jay arguably with the best opportunity within 5 minutes. He terrifically controlled the ball out of the air inside the box with an exquisite touch but his close-range effort was well saved by Stuart Nelson.

Attackingly, the Grecians looked lethal. Most football was being played in and around Yeovil’s box but with the visitors keeping 11 payers behind the ball, City found it difficult to break them down. The confidence was thriving in City’s team, Paul Tisdale’s side looked the mostly likely to break the deadlock.

Pierce Sweeney, Ryan Harley and Jake Taylor all had shots blocked inside the box, whilst Jay’s attempted header went narrowly wide of the post with the keeper rooted to the spot.

The visitors only managed to trouble City’s defence twice in the opening 45 minutes. Christy Pym came off his line rapidly to clear danger from a poor back pass, shortly after he saved a long-range effort diving to his right.

In the dying embers of the first-half, the home side came agonisingly close to taking a deserved lead. Hiram Boateng rattled the cross bar inside the box after a well worked free-kick. 0-0 at half-time.

Exeter picked up where they left off the in the second half, on top. Another huge chance for City following a corner within 2 minutes, from 5 yards out Dean Moxey headed the ball towards goal which skimmed the post and went wide.

The Grecians duplicated their first half performance, but to the frustration of the city fans, they couldn’t find the back of the net. Jay and Harley came close once more both firing shots over the bar. A good performance from Jay came to an end when he was replaced by Kyle Edwards in the 75th minute.

Yeovil didn’t see a glimpse of Exeter’s goal until the final 10 minutes. Pym made a terrific save on his near post to prevent the visitors from taking a shock lead. Moments later, a frustrated Ryan Harley was booked before being replaced by Liam Mcalinden.

City just couldn’t capitalise on their opportunities. With just 5 minutes to play, Stockely exploited space in behind Yeovil’s defence but dragged his shot narrowly wide from 5 meters out – another squandered opportunity.

Despite 6 minutes added time, the Grecians failed to breach the visitors defence ending a frustrating night with one point.

The result sees Exeter remain in the playoffs with just 12 games remaining in the campaign, but games are coming thick and fast. They travel to relegation strugglers Morecombe on Saturday.