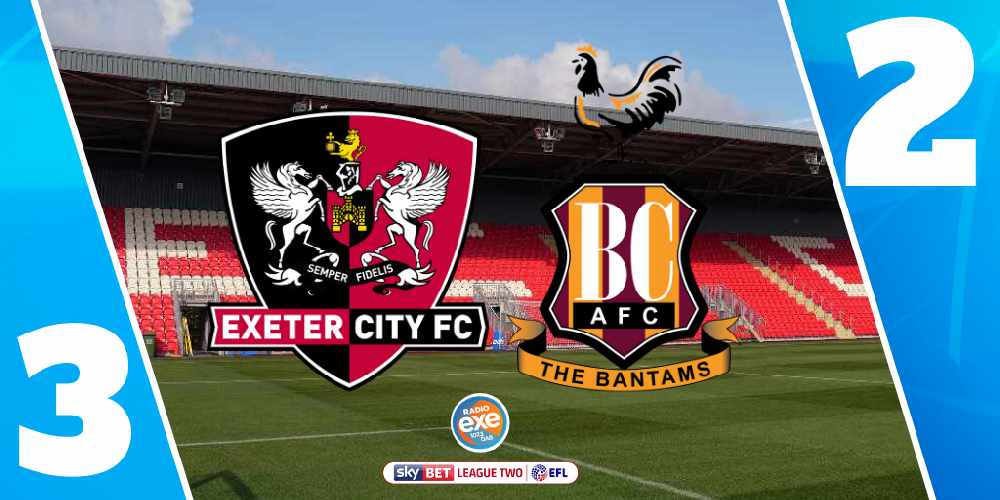 The impressive, hard fought win - Exeter’s second of the week - lifts them back into the play-off places.

Exeter started the game brightly and dominated possession, the hosts knocked the ball around impressively deep inside Bradford’s half, but it was the bantams who broke the deadlock inside 20 minutes.

To their credit, Bradford weathered the early storm well before scoring from a rapid counterattack – which was their first shot at goal in the 17th minute. Charles Vernam finished off the move with a thunderous shot that went in off the crossbar.

Despite the setback, City pushed for an equaliser and deservedly got it five minutes before the break. Centre back Pierce Sweeney jumped the highest to head home an in-swinging corner taken by Jack Sparkes.

Unfortunately for Exeter, their hard work was undone when a mix up between Sparkes and Jökull Andrésson gifted Bradford another goal on the stroke of halftime. Sparkes failed to clear the ball 5 yards out, Olly Crankshaw was on high alert to steal the ball from him and blast it into the back of the net.

City captain Jake Taylor had a big chance to level proceedings once more in the dying embers of the first half – but his header from close range looped over the bar. In a frustrating first half, City trailed 2-1 at the break.

Bradford sat back and defended for their lives in the second half as an impressive looking Exeter side hunted for the equaliser – which eventually, and deservedly, came on the hour mark. Wilmott whipped in a delightful cross for Ryan Bowman who headed home from close range.

With Exeter still on the front foot, City’s towering centre forward came close to giving his side the lead moments later – but Bowman’s headed effort from a corner was directed just wide of the target.

On the 80th minute, however, the Grecians did take the lead for the first time in the contest. Bowman was taken down by the goalkeeper in the box after latching onto a long ball. The referee awarded the penalty, which Matt Jay converted after kicking the ball straight down the middle.

Matt Taylor brought on Alex Hartridge and Ben Seymour in the final ten minutes to close the game out, which they did brilliantly. The promotion chasers sealed their second win of the week to take them back into the promotion places. It finished: Exeter City 3 Bradford 2.