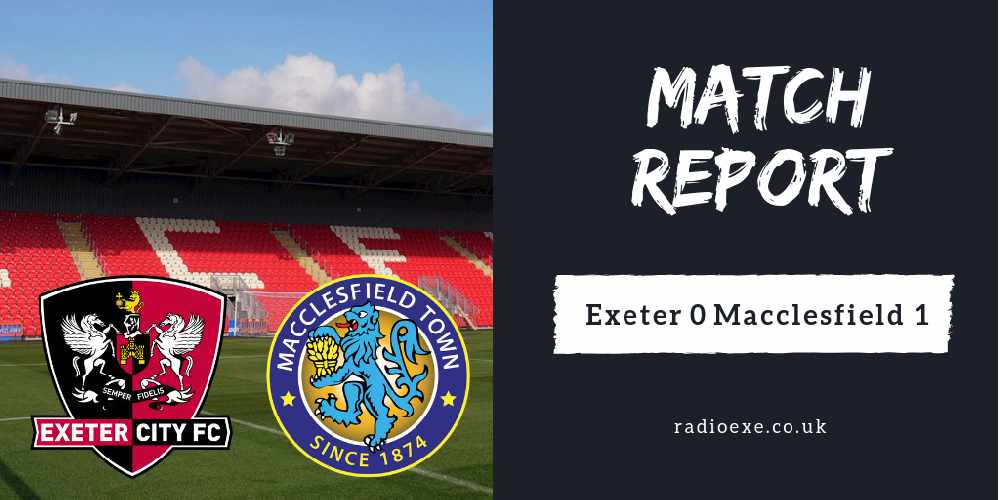 Boo's resonated around St James Park this evening as Exeter City continue to fall down the League Two table with their sixth league defeat of the season.

Bottom of the table Macclesfield, who have picked up just ten points this campaign, scored in the second-half to steal the three points under the floodlights at St James Park.

The Grecians, without a win in six league matches, were left frustrated at half-time as it finished goalless after 45 minutes. Exeter had the majority of play and chances, but failed to capitalise on their opportunities.

Within 10 minutes, City carved open the visitors defence with ease. Pierce Sweeney nearly gave city the perfect start, but his attempted shot from a tight angle was smashed into the side netting after being picked out at the back post.

Moments later, the clubs top goal scorer Jayden Stockley took on an ambitious volley outside the box, but his effort was well stopped by the goal keeper. His partner upfront, Johnathon Forte, also came close with a shot that went over the bar from five meters out.

Having dominated proceedings, the Grecians were nearly left devastated as Macclesfield caught them out on the counter attack. The visitors’ number 7 Eliot Durell took the ball around Christy Pym, but before he unleashed his shot at goal, Dean Moxey made a crucial challenge to deny a tap in.

No one saw it coming, but eight minutes into the second half, Macclesfield took the lead. During a rare attack, Elliot Durrell crossed whipped in a good cross to the feet of Harry Smith who guided the ball past Pym.

With the clock ticking down, moans and grown resonated around St James Park as Matt Taylor’s side struggled to snatch the equaliser. But they came close, agonisingly close. Nicky Law fizzed in a corner towards the head of Dara O’shea – but the centre backs headed effort was inches away from the post.

Urgency was required in the dying embers of the game, but the hosts couldn't stage a comeback. What next for Exeter City?