City back to their very best 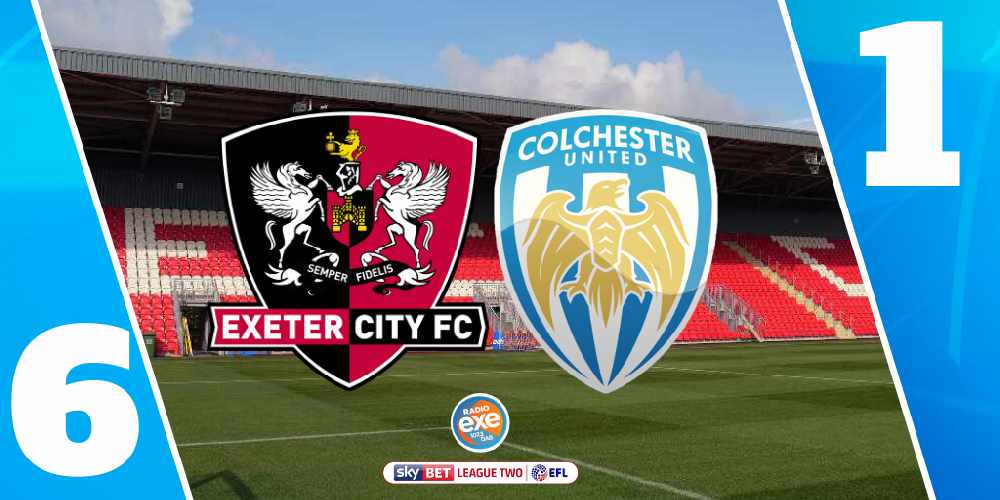 Lower league opposition Oldham Athletic ended City’s 13 game unbeaten run on Saturday to inflict just their second defeat of the season – but the Grecians bounced back superbly under the floodlights at St James Park as they thumped Colchester 6-1.

It's Exeter's biggest win under Matt Taylor, Ryan Bowman's first-ever hat-trick for the club and the first time City have scored six goals in a league game since November 1993!

The emphatic victory, city's sixth of the season, is hopefully the last game that will be played behind closed doors at St James Park, after the government's positive announcement on Monday.

Today’s game promised to be an exciting one - just one point separated the two promotion contenders, who met in last season’s play-off semi-final, prior to kick-off - and the opening half didn’t disappoint.

The hosts started with high intensity, and although Colchester created the first shot on target, which was comfortably saved by Andresson, the Grecians dominated in terms of chances and possession.

City’s best opportunity in the early stages fell to academy graduate Matt Jay and Joel Randall. Jay turned well inside the box before firing a low driven attempt just wide of the far post before Randell, on the stretch following a cross, chipped the ball over the bar from just two metres out.

Exeter did, however, eventually capitalise whilst being on the front foot with a well taken goal following another flowing team move. Ryan Bowman used his strength to hold the ball up before passing to Randall on the wing, the youngster beat his man and picked out Jay in the box, who guided the ball past the goalkeeper.

The Grecians were unlucky not to score another before the break. Bowman came agonisingly close to doubling the lead when his headed attempt was cleared off the line and Jay fired another effort just wide of the post, not to the amusement of Bowman, who was unmarked and in a good position the box.

Matt Taylor forced an under-par Colchester side to make three changes at half-time – but they didn’t influence the game instantly as City picked up where they left off after the break.

For the second time in the contest, City saw another shot cleared off the line - Jay was the unfortunate attacker this time with a close-range header.

Moments before Colchester looked to be growing into the game – Exeter hit them with a devastating break to deservedly score a second. Williams threaded the ball to Jay who found himself one on one with the keeper, rather than shooting at goal, he squared the ball to Randell who tapped the ball into an empty net.

Less than two minutes later, a rampant Exeter side bagged another. Jack Sparks drilled in a low ball for Bowman and the towering centre forward fired home from six yards out.

A rattled Colchester side had no answers as they conceded a fourth goal, the most they’ve conceded all season. Bowman was at the end of another pinpoint accurate cross from Randall to knock it home from close range.

The visitors did pull a goal back from a rare counterattack with 20 minutes to play – but any hopes of a comeback were slashed when Bowman bagged his first-ever hat-trick for the club. Sparkes saw his effort hit the bar, but Bowman was there on the rebound to follow up and tap the ball into an empty net.

In injury time, City made it six. Substitute Nicky Ajose fired the ball against the post with a long-range effort – the rebound fell fortunately to an Exeter player once more; Jay was on hand to pass it into an empty net.

An outstanding performance from the Grecians ended: Exeter City 6 Colchester 1

Up next, attentions turns to the FA Cup – City travel to Gillingham on Saturday.