City bounce back with impressive win 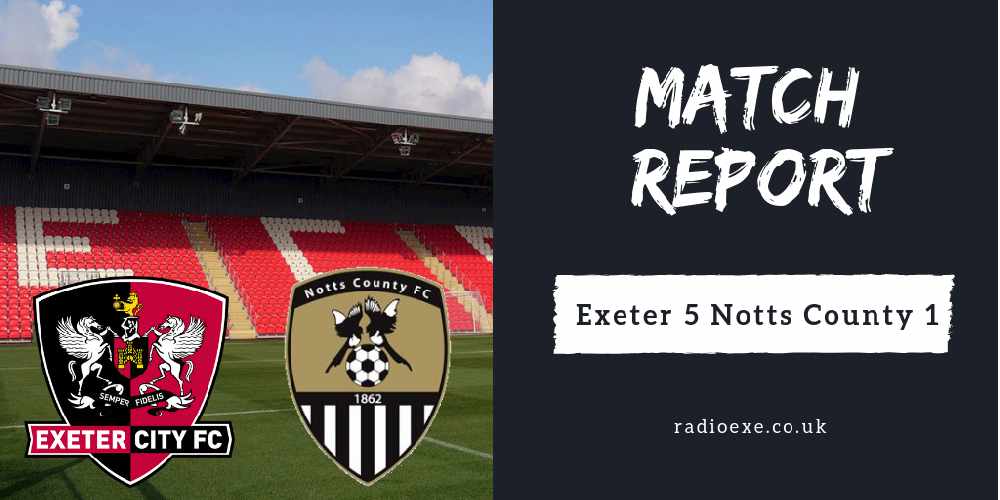 "Throw in the towel ref."

Exeter fans can breathe a sigh of relief. The Grecians pick up their first points after three games in League 2. It was an exhilarating game of football. It featured red cards and penalties, but most importantly, goals. And lots of them.

Pierce Sweeney and Jayden Stockley scored two each. Centre-back Aaron Martin also got his name on the score sheet to give Exeter their fourth league win of the season.

The Grecians came into the game on the back of two successive league defeats, but their opposition this afternoon, Notts County, provided them the perfect opportunity to get back on track and take advantage of a team that’s only secured one point this season.

Exeter enjoyed dominating possession in the opening 20 minutes. Deservedly, they took the lead. Within the space of two minutes, they scored two goals. Lee Holmes whipped in a delightful ball towards the head of Sweeney who guided it into the back of the net.

The fans were still celebrating city’s first goal when they scored their second. Hiram Boateng fired a ball across the face of goal which found the boot of Stockely who tapped it into an empty net. There’s nothing Christy Pym could have done to stop the visitors first goal. He was well beaten by an accurate shot which found the top corner of the net. It finish 2-1 at half-time.

Holmes was terrorising the Notts County defence all game. Once more, he weaved his way into the box to unleash a shot  which was tipped over the bar. In the resulting corner, the referee gave Exeter a penalty after spotting hand ball in the box. Sweeney impressively tucked it away for his second of the game.

City’s fourth, scored by Stockely, was a replica of his first. The centre forward side footed the ball into an empty net following a Nicky Law Cross. Adding salt to the wound for Notts County, Exeter's centre-back Aron Martin added a fifth.

In a high tempered final 20 minutes, the Notts County manager received a red card for a sarcastic clap at the referee. A disapointing day for the visitors, but a positive one for the hosts that will fill them with confidence going forward.