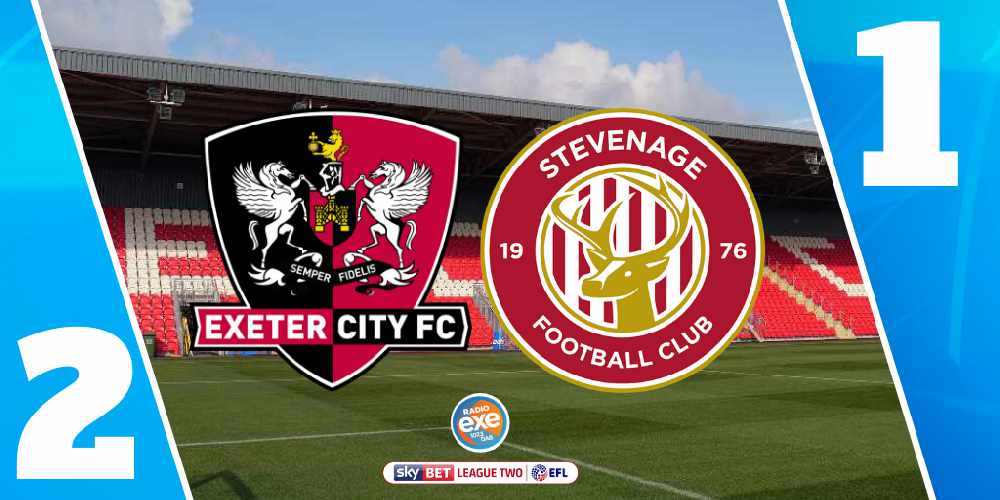 Grecians bounce back to winning ways

Exeter City have had a hiccup in recent weeks – picking up just one point from their last three games – but they’re now back on track after beating bottom of the table Stevenage 2-1 at St James Park.

Randell Williams’ first-half header and a late goal from substitute Matt Jay proved the difference as Exeter climb to third in League 2.

To make the victory even sweeter, City leapfrog Devon rivals Plymouth Argyle – who lost 3-0 to Colchester.

Exeter manager Matt Taylor made three changes to the side that lost to league leaders Swindon last week. Brennan Dickenson, Archie Collins and Nicky Ajose all came into the starting line-up.

The Grecians controlled the first half – but they were frustrated for much of it as they struggled to break down a stubborn Stevenage defence.

Chances were hard to come by in the opening 45 minutes. It was Exeter, though, who created the best chance five minutes in - it fell to defender Aaron Martin. Randell Williams, who was the best player in the first half, whipped in a good ball into the box. Martin got his head to it, but he directed it just wide of the far post.

The frustration resonating around St James Park started to build when City’s midfield maestro Nicky Law picked up a nasty knock 20 minutes in – the 31-year-old was replaced by Matt Jay.

Eventually, just after the half hour mark, Exeter’s stack of pressure was rewarded when Randell Williams fired home a header from close range. It was nothing more than the hosts deserved. It ended Exeter 1 Stevenage 0 at the break.

As expected, the hosts enjoyed the majority of possession in the second half – and ten minutes in, Ajose was gifted a glorious chance to double the lead. City’s forward spotted the Stevenage goalkeeper off his line, but his attempted chip skimmed the post and went wide.

Minutes later, Brennan Dickenson’s shot was well saved by the keeper before Bowman hit the post with his left foot inside the box.

However, despite being second best by quite some distance, Stevenage scored from nothing. Daniel Kemp latched onto a log ball through the middle.

A brilliant response from the hosts. It ended: Exeter 2 Stevenage 1