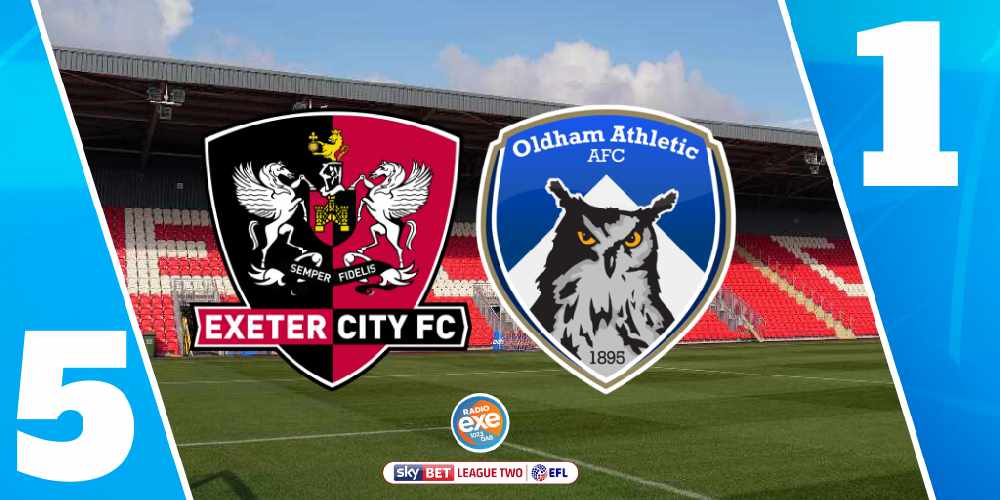 The Grecians recorded their biggest win of the season this evening by beating Oldham 5-1 under the floodlights at St James Park. The emphatic victory consolidates their spot in the automatic promotion places.

The last time Exeter scored four goals or more in a league game was against Plymouth Argyle, who won 3-2 this evening, in October last year.

------ Exeter City manager Matt Taylor made two changes from Saturday’s 2-1 win against Stevenage. Matt Jay and Jayden Richardson replaced Nicky Law and Brennan Dickenson – and the duo combined brilliantly in the 20thminutes to score the opener.

Jay threaded through a delightful pass to Ajose inside the box - the forward controlled the ball well before delicately chipping it over the goalkeeper.

The next 20 minutes, however, belonged to the visitors. Oldham scored the equaliser three minutes after conceding following a short corner.

With the momentum behind them, Oldham pilled on the pressure and controlled large periods of the first-half. Exeter goalkeeper Lewis Ward needed to stay sharp to make a handful of brilliant saves to keep the scores level. City's number one impressively beat away a low driven shot inside the box before palming away a long-range effort.

Matt Taylor’s side weathered the storm well, though, and three minutes before half-time – Mat Jay scored a penalty. David Wheatre used his hands to deliberately stop Randell Williams’ shot on goal – as a result, the defender was shown a red card which turned the game on its head.

With the man advantage in the second half, the Grecians picked Oldham apart. Like a training exercise, they kept hold of the ball well and slowly started to create chances on goal.

City captain Archie Collins soon made It three in the 50th minute with a 25-yard rocket. The midfielder hit the ball sweetly – the goalkeeper got something on it – but there was too much power behind the shot for him to keep it out.

Ten minutes later, Bowman got in on the act. The towering centre forward jumped well to head in a Pierce Sweeney cross before being replaced by Alex Fisher.

Despite a healthy lead, City weren’t resting on their laurels late on. Brennan Dickenson scored a fifth - his first goal for the club - in the 90th minute to record Exeter's biggest win of the season. It ended Exeter 5 Oldham 1. Another positive performance from the Grecians - but wins around them mean they stay in third place.