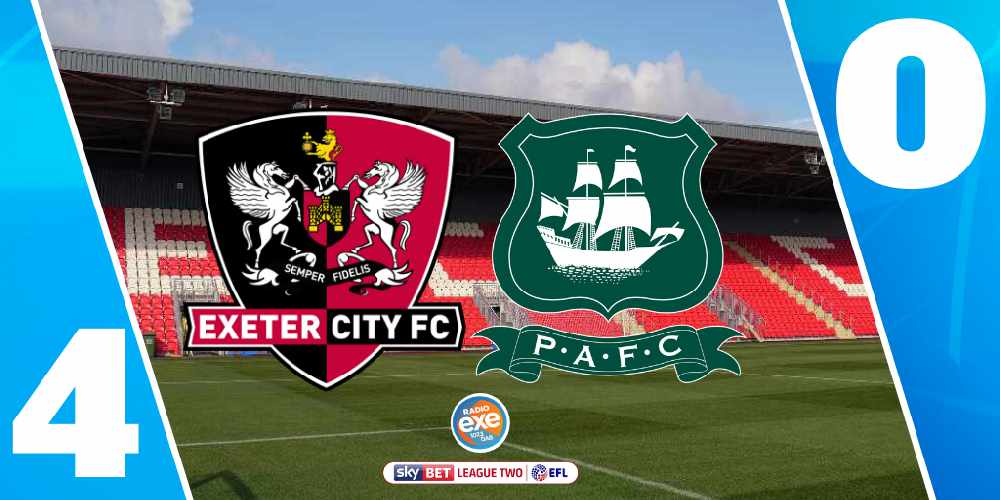 “There’s only one team in Devon” chant the Exeter City fans as more than 7,500 of them packed the park to watch the Grecians emphatically beat bitter rivals Plymouth Argyle in the Devon Derby – in what was the 105thmeeting between the two sides.

Goals from Tom Parkes, Randell Williams and a brace from Nicky Law gave a fired-up Exeter City side the Devon Derby bragging rights with a comfortable 4-0 triumph.

The win, Exeter’s first in three games, leaves them second place in League Two – and six points above Plymouth.

City manager Matt Taylor made six changes to the side that lost against Scunthorpe on Tuesday night. Pierce Sweeney, Craig Woodman, Nicky Law, Lee Martin, Jake Taylor and Randell Williams all came into the starting 11.

The Grecians thrived under the deafening atmosphere at St James Park and deservedly took a narrow lead into the break.

The hosts looked lively and came out the blocks the quickest - City captain Jake Taylor had the first shot inside the opening two minutes. The midfielder tried his luck from 30 yards out with a low drive towards goal – his effort took a deflection and went behind for a corner. The following set piece led to Lee Martin having a shot blocked inside a congested box before the winger smashed it over the bar.

Ten minutes later, City’s top goal scorer Ryan Bowman had a glorious chance to break the deadlock with a header at the back post. Randell Williams chipped the ball into the box and picked out an unmarked Bowman, however, the centre forward headed wide from 5 yards out.

But, with five minutes to play, City took the lead through a penalty kick – and it was nothing more than they deserved. Martin was brought down in the box – Nicky Law sent the goalkeeper the wrong way. Half-time: Exeter 1 Plymouth 0.

Exeter continued their dominance in the second half and doubled their lead five minutes in. Following a free kick near the corner flag, Tom Parkes smashed a header past Alex Palmer.

15 minutes later, City made it three. Law chipped the ball in behind Argyle’s defence to set free Williams. The winger took the ball in his stride before calmly dinking it over the goalkeeper.

Despite the three-goal cushion, Matt Taylor’s side weren’t resting on their laurels. Bowman and Williams were both inches away from making it four. The attacking duo had back-to-back efforts on goal inside the box – but both took deflections and went agonisingly wide.

The work rate from Exeter in the final stages were excellent – and they eventually grabbed a fourth with five minutes to play. Captain Taylor smashed a 30-yard effort towards goal – it bounced off the post but fell to Law who tapped the ball into an empty net.