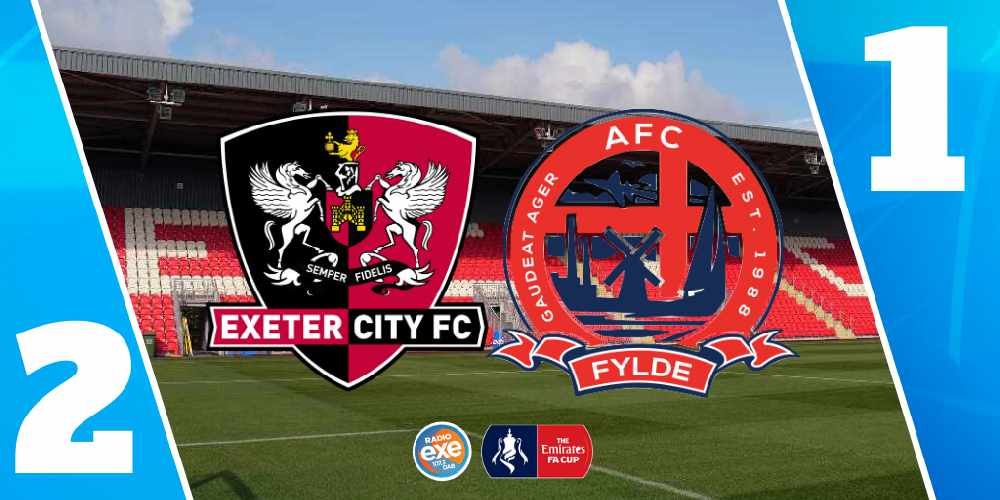 Grecians avoid upset and progress into second round

Exeter City win their first game in the FA Cup this season after beating AFC Fylde 2-1 at St James Park.

City know all too well about non-league sides in the competition - they were knocked out in the first round against Hartlepool last season - but this time out, the Grecians made no mistake.

Exeter boss Matt Taylor made a statement of intent as he called upon a handful of his star players in a move to avoid another cup upset, however, it was the less experienced youngsters who prevailed and impressed the boss in an entertaining first half.

Today’s game wasn’t as one-sided as many predicted it to be. City kept the ball well in the opening 45 minutes, but to the shock of everyone inside an empty St James Park, sixth tier Fylde took the lead inside 10 minutes. Jordan Hulme finished off a rapid counter attack by drilling the ball low and hard past Andresson into the bottom corner.

The visitors, who currently sit top of the National League North table, came close to doubling their lead soon after. City’s 19-year-old keeper, on loan from Reading, was called into action once more to stop a long range shot from Ben Tollitt before using his reflexes to deny Nathan Shaw from close range.

It was a rather nervy start for the Grecians – but the hosts eventually found their stride and recovered well to get back on level terms. Matt Jay, one of five academy players in the starting line-up, scored Exeter’s first goal of the afternoon. The forward turned superbly inside a congested box and fired the ball clinically into the bottom corner.

Alex Hartridge, another academy prospect, doubled Exeter’s lead less than five minutes later. The youngster was in the right place at the right time to volley the ball into the back of the net from a corner. The Grecians led at the break.

A one goal lead is a dangerous score line in the FA Cup – and Fylde reminded the Grecians of that. Andersson produced another crucial save, this one was the pick of the bunch, to keep his side in front early in the second half. Pushing for their second goal of the game, Nathan Shaw thought he’d scored from five yards out, but he was denied brilliantly by Andresson who flew to his right and tipped the ball over the bar.

In a quieter end to the half, chances were hard to come by. Credit to Fylde; they had lots of possession in dangerous areas and whipped in a number of crosses – but they couldn’t find the finishing touch.

In a hard-fought contest, it ended: Exeter City 2 Fylde 1

The win ensures that City progress to the second round of the FA Cup, which will be played on November 28. Before then, however, the high-flying Grecians travel to Bradford on Tuesday looking to continue their impressive unbeaten run.