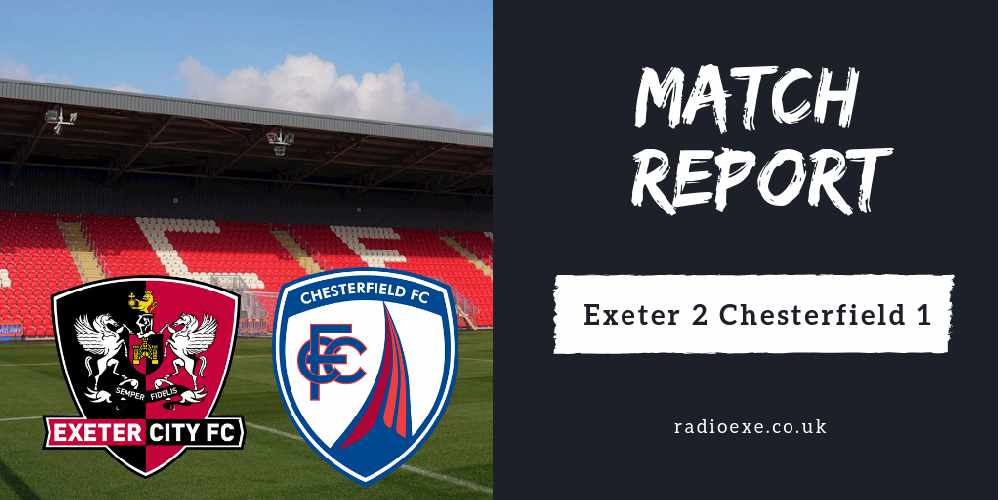 Jayden Stockely heads in his 17th goal of the season as Exeter keep play-off hopes alive with victory over bottom of the table Chesterfield.

With just three games remaining in the season, playing with a game In hand, Exeter looked to leap frog Notts County and cement their place in the play-offs with victory over strugglers Chesterfield.

City manager Paul Tisdale made two changes to the side that drew 1-1 with league leaders Accrington Stanley on Saturday. Luke Croll and Robbie Simpson replaced the inform Matt Jay and Dean Moxey.

Many home fans gathered in St James Park would have expected a domination, 38 points separated the two sides before kick-off, but the opening 45 minutes was anything but.

It took half an hour for the hosts to create a clear cut chance, but when they did, they broke the deadlock. Jake Taylor, who was booked for a late challenge on a Chesterfield player within 20 minutes, found space on the right hand side and floated in an exquisite ball towards the head of Jayden Stockely who slotted away his 17thleague goal of the season.

City’s Lloyd James had a volley pushed past the post soon after Kane Wilson fired a shot across goal which was well turned behind for a corner. Down the other end, not much troubled Christly Pym as Exeter stood strong in defence. The Grecians led 1-0 at half-time.

The swirling wind mixed with persistent rain worsened in the second half with both teams struggling to adapt.

Unlike the opening 45 minutes, the visitors looked more threating going forward. It took a sensational save from point blank range to keep City in the lead. Pym superbly denied a powerful shot from just six yards out after Lloyd headed the ball against his own post.

To settle the nerves inside the stadium, City grabbed a second to double their lead. Forcing a corner from a well-connected Pierce Sweeney free-kick, the ball was scrambled into the net from five yards out.

However, with just 5 minutes remaining in the match, Chesterfield reduced the deficit with a surprise goal and very nearly scored an equaliser in the dying embers. A strong penalty appeal for the visitors was turned down before the referee blew the final whistle.