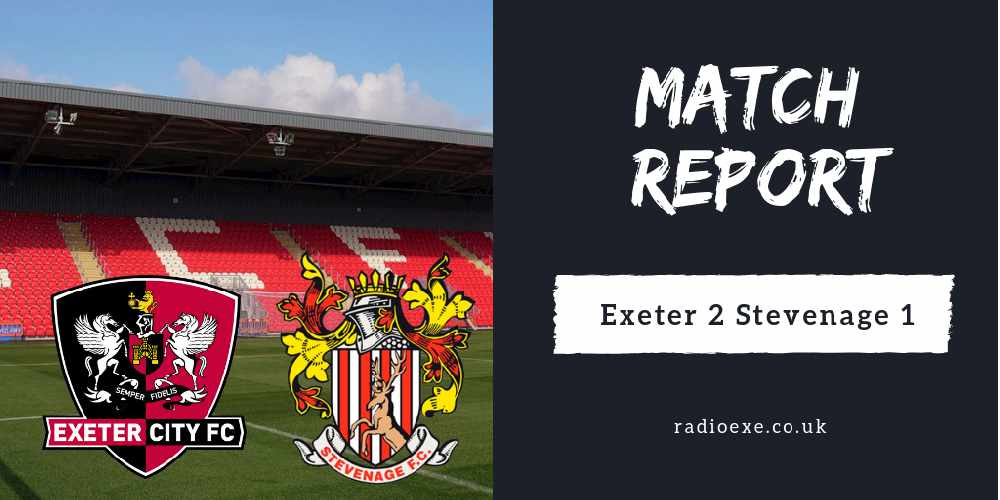 Having played a full 120 minutes on Tuesday evening against Forest Green Rovers in the FA Cup, and progressing into the next round of the competition, the only concern for Exeter City leading into this game was fatigue. They welcomed 16th place Stevenage to St James Park in League 2.

Within the first 5 minutes, a succession of crosses was whipped into the heart of Exeter’s box, Christy Pym had to be alert to clear the danger on two separate occasions. Despite the visitors setting camp deep inside City’s half, they never looked like scoring.

It was Exeter, however, who created the first clear cut chance of the game, and it came in the 10th minute. Running with the ball, Lloyd James was caught by a late tackle just over the half way line resulting in a free kick. Throwing men forward for the set piece, Boateng floated the ball into the box which kindly fell to the feet of Jayden Stockley. But his close-range effort was somehow denied by a superb reaction save from the goal keeper.

Just 10 minutes later, City had another attempted saved. Liam Mcalinden skilfully passed a few players to make space on the left-hand side, he drilled in a low ball to Pierce Sweeny whose attempt was tipped over the bar.

30 minutes into the first half, City injected a sustained amount of pressure, but couldn’t turn their dominance into a goal. Frustration started to build around the ground as more City chances went begging. Harley struck a sweet half volley on the edge of the box, but directed straight at the keeper. Soon after, a free kick, in the same position, was cleared down field.

Paul Tisdale’s men were nearly punished for not capitalising on their opportunities, on the break, Stevenage created a two on one situation with the City defenders. And just outside the box, a Stevenage forward unleashed a low drive, which beat a diving Christy Pym, but went narrowly wide of the post.

Nothing separated the teams at half time. Exeter 0 Stevenage 0

St James Park could sense a goal. It was coming. And it did. Eventually, the Grecians found the back of the net – 5 minutes into the second half. Lloyd James showed good strength as he surged forwards through the heart of the Stevenage defence. With his right foot, his clinical finish found the bottom left corner. Not only did it give City the lead, it also woke up a quiet St James Park, down came the rain, up came the noise.

(71) Goal. In Stevenage’s half, Jake Taylor was caught by a high boot, deemed as a dangerous foul by the referee, the Stevenage player was penalised with a yellow card. The ball was crossed deep to the back post and found Mcalinden. His effort was pushed away by the goal keeper, but the rebound fell to the feet of Sweeney who smashed the ball home for City’s second.

Suddenly, out of nothing, the visitors reduced the deficit. Following a corner, Matt Godden volleyed the ball past Pym in a rather congested City box. Pym obviously wasn’t happy, he kicked the ball into the stands out of pure frustration, in doing so, received a yellow.

Now it was City’s turn to defend. In the dying embers of the game, Pym produced a wonder save to deny the equaliser. He tipped a sublime effort onto the bar. Soon after, several crosses and corners were loaded into Exeter’s box. Along with several blocked shots. City survived the scare – and the Grecians nearly scored a third in extra time. On the counter attack, Matt Jay headed the ball onto the bar.