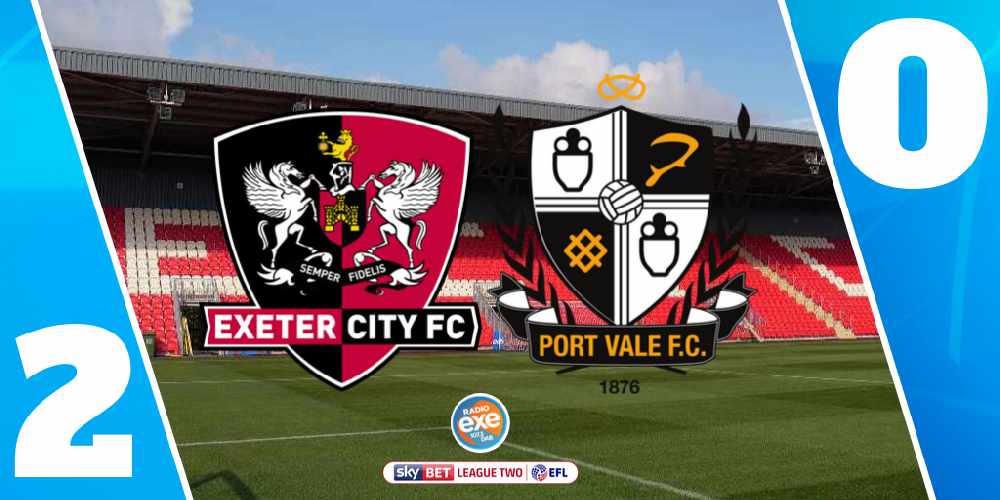 Exeter City, the only unbeaten team in League 2, continue their faultless start to the season with a well-deserved 2-0 victory against Port Vale under the floodlights at St James Park.

Exeter City manager Matt Taylor, who turned down an offer from an unnamed club earlier this week, made three changes to the side that drew on the weekend. Tom Parkes, Jayden Richardson and 19-year-old prospect Ben Seymour, an academy graduate, came into the starting 11.

The Grecians controlled the first half, like they’ve been doing all season, but failed to find the back of the net.

15 minutes into the game, it was Jack Sparkes who came closest to breaking the deadlock with a superb individual run. The 18-year-old skipped past two defenders before firing a curling effort from 20 yards out - but the youngster’s ambitious shot was impressively denied by an athletic one-handed stop by Port Vale’s goalkeeper.

Nicky Law blazed another effort over the bar before Tom Parkes had his header cleared of the line following a corner – Matt Taylor’s side with the best chances inside the opening 45 minutes, but it ended goalless at the break.

In a slow start to the second half, the visitors had a rare shot on target in the 54thminute. Adam Crookes tried his luck from just outside the box, although it was comfortably saved by the inform Lewis Ward between the sticks.

On the hour mark, City came extremely close to scoring the opener, but the hosts were denied by the woodwork. Following an in-swinging Nick Law corner, Ryan Bowman jumped the highest to head the ball towards goal, however the towering centre forward’s shot deflected off the woodwork before Sweeney’s follow up shot was blocked inside a congested Port vale box.

City final breached Port Vales defence in the 80thminute and got the goal they richly deserved. City substitute Lee Martin cut inside the box and fired a shot into the far corner, it was well saved, but the rebound fell to Bowman who calmly headed it into an empty net.