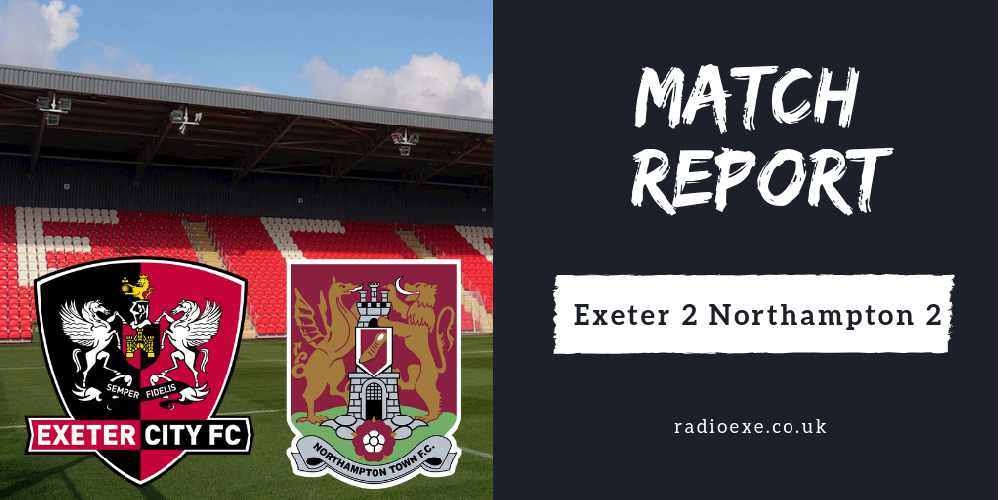 A Northampton goal in the final minute of normal time denied three points for Exeter City at the end of an entertaining match at St James Park.

The Grecians haven’t won a league game since October 13, as they now drop to sixth place in League 2.

City manager Matt Taylor made four changes to the side that lost to Blackpool in the FA Cup last weekend. Christy Pym, Lee Holmes, Tristan Abrahams and Aaron Martin were all brought into the starting eleven.

The Grecians approached the game with an attacking mindset. Within 10 minutes, captain Jake Taylor had his shot saved from outside the box moments before Lee Holmes smashed the crossbar.

With their tales up, Exeter’s lively start was soon rewarded. Taylor, who was yet to score this season prior to kick-off, put his laces through the ball to fire the Grecians in front.

Matt Taylor’s side continued to attack the Northampton defence. But when city committed men forward, it left them vulnerable at the back. Against the run of play, the visitors equalised directly after an Exeter corner.

However, despite the setback, Exeter soon found themselves back in front. City’s top goal scorer Jayden Stockely with the goal. The towering centre forward was picked out at the back post as he headed the ball into the back of the net. It finished 2-1 at half-time.

The Grecians came close to extending their lead in the second-half as Nicky Law’s ambitious attempt from 20 yards narrowly missed the target. 20 minutes later, Stockely fired the ball wide from inside the box.

However, In injury time, the visitors threw men forward in pursuit of the equaliser, and they got it. The ball was floated in to a congested city box and found the head of Andy Williams who calmly guided the ball past Pym.