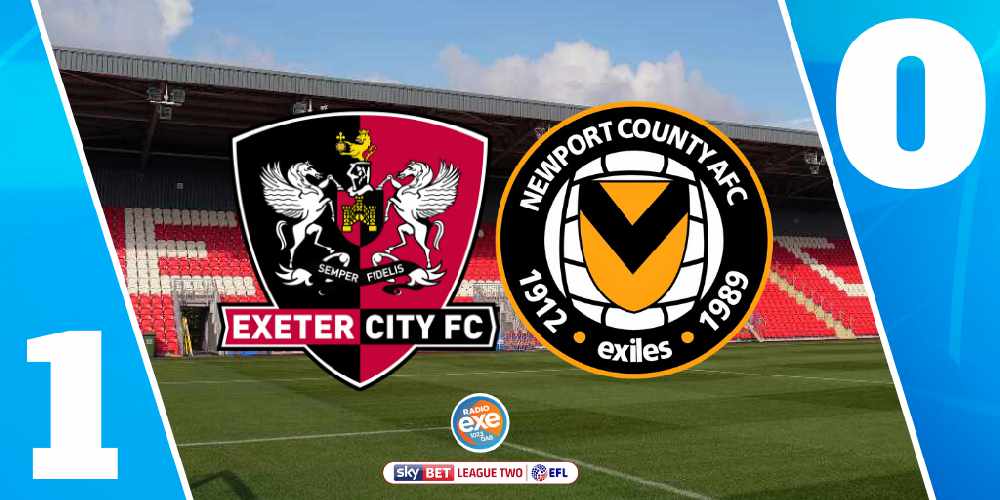 Exeter City fans received a belated Christmas present on Boxing Day as their side comfortably beat Newport County 1-0 at St James Park. One goal from Lee Martin was enough to seal the three points.

The playing conditions were tough for both teams. The rain was consistent, and the ground was muddy – even the ball boy slipped over to the crowd’s amusement.

But it was the hosts who adapted the quickest and deservedly took an early lead 12 minutes in.

On the wing, Randell Williams fizzed the ball across a skiddy surface for Ryan Bowman. The forward did well to lay it off for Taylor – but the captain’s shot was blocked. The rebound, however, fell on a plate for Lee Martin who smashed home his sixth goal of the season

Following the opener, chances were hard to come by before the break. It was Exeter, though, who had the best of them and enjoyed the majority of possession. Ryan Bowman’s effort inside the box was deflected just wide before Martin was denied a second thanks to a brilliant near post save.

Down the other end, it was a fairly quiet afternoon for City goalkeeper Jonny Maxted. The goalkeeper’s only save of the half came in the 40th minute. Maxted comfortably stopped Tom Maloney’s tame effort from outside the box. It ended Exeter 1 Newport 0 at the break.

Although the Grecians controlled the second half, they never looked like scoring. Sweeney came the closest from long range – his 30-yard effort was saved well by the goalkeeper.

Newport kept their shape well to deny any defensive breach – and they looked dangerous on the counter. Their first promising shot at goal came in the 78th minute. George Nurse fired an effort at goal inside a congested city box, but Maxted did well to get down low and gather the ball cleanly.

Despite a lengthy time of four additional minutes, the Grecians held onto their narrow lead. It ended: Exeter City 1 Newport 0