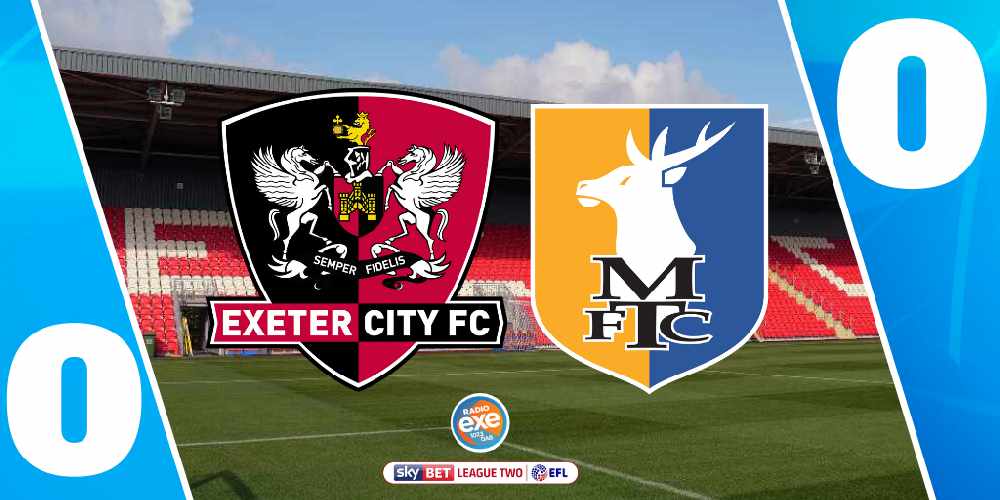 It wasn’t the response Exeter City manager Matt Taylor wanted after his side suffered a damaging defeat on Good Friday.

The promotion chasing Grecians couldn’t bounce back to winning ways as they dropped more valuable points against League Two strugglers Mansfield Town - who haven’t won in their last seven games.

The lacklustre contest at a sunny St James Park ended goalless, and now without a win in their last three games, Exeter loosen their grip on the play-off places once more.

City manager Matt Taylor made three changes from last time out; captain Jake Taylor returned to the starting 11 as did Pierce Sweeney and Robbie Willmott.

The hosts nearly had a nightmare start when, after two minutes, an ambitious half volley inside the box went just wide of Andresson’s far post.

Mansfield continued to threaten City’s goal, and 15 minutes later, they came even closer to breaking the deadlock. A deflected shot inside the box from Ollie Clark trickled agonisingly wide of the far post before Andresson got down well to deny Stephen McLaughlin.

City were second best for much of the half – but they did come close on the stroke of half time when Jack Sparkes’ close-range header was brilliantly saved on the line by the goalkeeper. However, an uninspiring opening 45 minutes, from City’s point of view, ended goalless.

Taylor made just the one change at the break - Randell Williams came off the bench and created a few decent chances; the closest he came was in the 70th minute. The winger cut inside three defenders inside the box before firing a shot on goal – but it was well blocked.

City survived two late scares at the death – Andresson pulled off a great short range save from Sinclair before a huge penalty appeal for the visitors was turned down in the 80th minutes. Mansfield’s forward was shown a yellow card for diving.