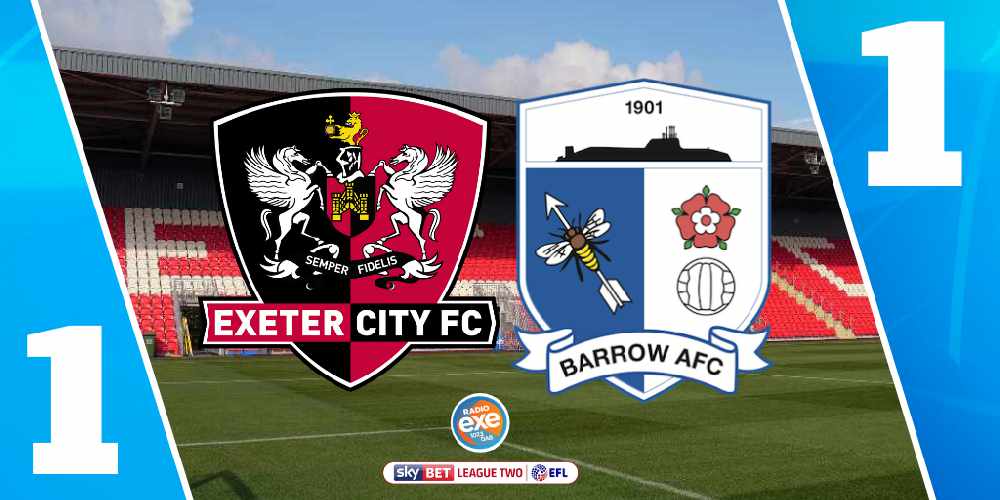 Exeter City drop points at home to Barrow in the last game of the season to slash their chances of a spot in the play-offs.

This unpredictable campaign went right down to the wire for the Grecians, who relied on Forest Green Rovers and Newport dropping points, to confirm a play-off spot in a dramatic finale to the League Two campaign.

However, it wasn’t to be.

Both Forest Green and Newport secured critical points – so even if Exeter were to beat Barrow, they wouldn’t have made the cut.

Matt Taylor’s side will now play in League Two for the tenth consecutive season.

Exeter survived two early scares from the visitors before City’s top goal scorer, Matt Jay, fired the Grecians into the lead inside half an hour; Robbie Willmott curled the ball across the six-yard box for the forward to tap home his 20th goal of the season.

The hosts dominated possession throughout the half, but they struggled to create chances in front of goal, they managed just three shots in the opening 45 minutes. Nevertheless, they led 1-0 at the break.

However, unfortunately for the Grecians, their lead lasted just 20 minutes. Barrow landed a major blow early in the second half when Tom Beadling fired home from a rare corner, the equaliser knocked Exeter out of the play-offs.

Conditions worsened late in the half, with a mix of rain and strong wind, as Exeter pushed for the winner to give them hope of getting back into the final play-off spot.

However, Taylor’s side were unable to stage a second half comeback, despite a big chance for Ryan Bowman 5 yards out, as League Two strugglers Barrow slash Exeter’s chances of promotion.