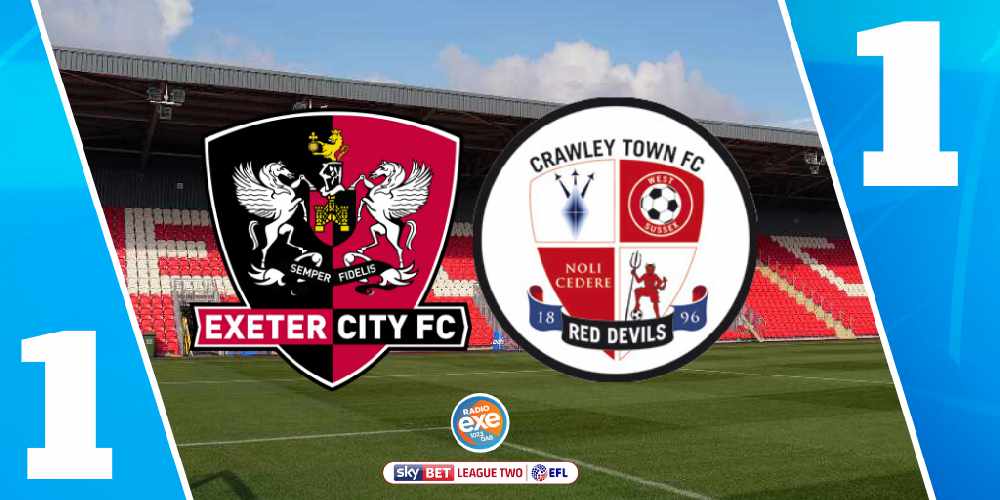 Grecians leave it late to equalise

Exeter City were left frustrated after being held to a 1-1 draw against Crawley Town this afternoon.

It proved to be an extremely frustrating opening half for the Grecians – they dominated possession but found themselves behind at the break.

The hosts had the best chances to break the deadlock – but to the bemusement of manager Matt Taylor – they weren’t clinical enough.

Ryan Bowman was gifted the best chance. The towering centre forward, who was unmarked in the five-yard box, sent a header just wide of the post following a Randell Williams cross.

Both City wingers were causing havoc for the Crawley defenders. Williams curled the ball just wide of the post before Brenan Dickenson nearly caught the goalkeeper out at his near post.

City paid the price for their missed chances just after the half hour mark. One long pass through the heart of Exeter’s defence sent Ashley Nadesan through on goal – the forward kept his cool and chipped the ball over Lewis Ward.

Pierce Sweeney came agonisingly close to an instant response less than five minutes later. The defender tried his luck from 20 yards and hit the post. Nigel Atangana attempted a long range shot soon after – but his effort went over the top.

City trailed 1-0 at the break.

The crowd were given a much-needed boost during the half-time interval when they heard third place Plymouth Argyle were 2-0 down.

Exeter hit the post for the second time five minutes after the break. City captain Jake Taylor jumped well from a corner to head the ball towards goal – he got great connection on the header, but it smashed the post.

Exeter continued to pile on the pressure – but Crawley weathered the storm well and nearly doubled their lead on the counter. Lewis Ward made another fine save from close range.

Finally, in the 80th minute, City eventually scored their goal they richly deserved. Dickenson fired the ball into the bottom corner.

The Grecians pilled on late pressure and were unfortunate not to score the winner. Williams came the closest with a header at the back post that went over the bar.