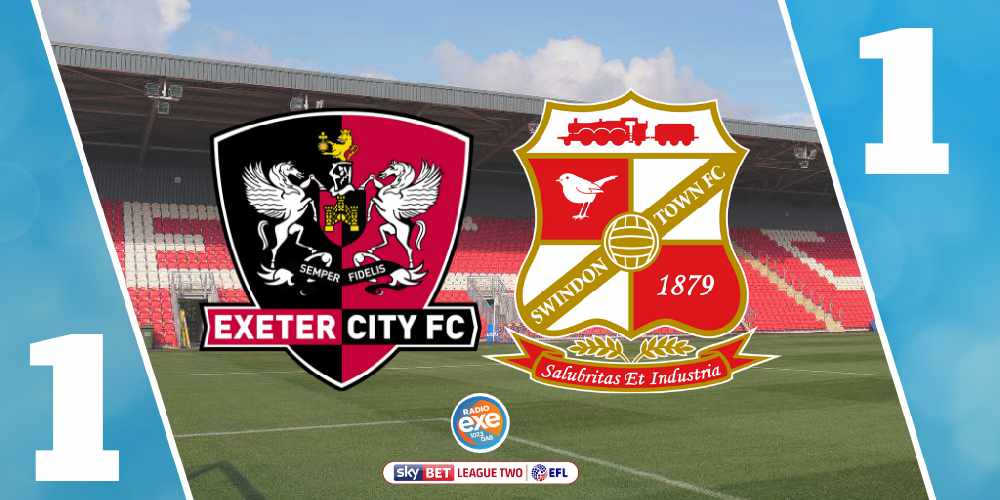 Matt Jay came off the bench to score in the 70th minute, but Swindon equalised with three minutes to play to deny the Grecians all three points in an entertaining showdown at St James Park.

Both sets of fans seemed happy with the point - which leaves Exeter City second and Swindon first in the League Two table.

Exeter City manager Matt Taylor made one change to the side that beat Stevenage in League 2 last week – Aaron Martin replaced the suspended Tom Parkes in central defence.

The Grecians were fortunate to go into the break without conceding as an impressive looking Swindon side, backed by more than 1,000 travelling supporters, controlled the opening 45 minutes.

Just two minutes in, Swindon’s Lloyd Isgrove found himself one on one with Lewis Ward thanks to a low driven long ball through the heart of Exeter’s defence. However, using his pace effectively, City’s Aaron Martin made a heroic diving tackle in the nick of time to clear the danger.

The visitors' rapid counter attacks were causing the Grecians all sorts of trouble at the back. Following a ten-minute bombardment at City’s goal, Martin was in the spotlight once more to clear the ball off the line before Swindon’s Eion Doyle rattled the post with a shot on the edge of the box.

Matt Taylor’s men weathered the storm well, however, but the hosts didn’t look much threat going forward. City’s Jake Taylor and Randell Williams had shots saved from long distance – but that was as close as they came. It ended goalless at half-time.

Matt Taylor made two substitutions midway through the second half, Matt Jay and Lee Martin came on, and the duo made an instant impact. Exeter enjoyed an incredible ten-minute spell which saw Jay break the deadlock in the 70thminute.

Moments before Randell Williams hit the bar with an attempted cross, Jay fired home from inside a congested Swindon box for the opening goal. The 23-year-old forward came extremely close to scoring a second 5 minutes later. Following a corner kick, Jay volleyed an effort towards goal, but his attempted shot was blocked on the line.