Exeter knocked out of FA Cup 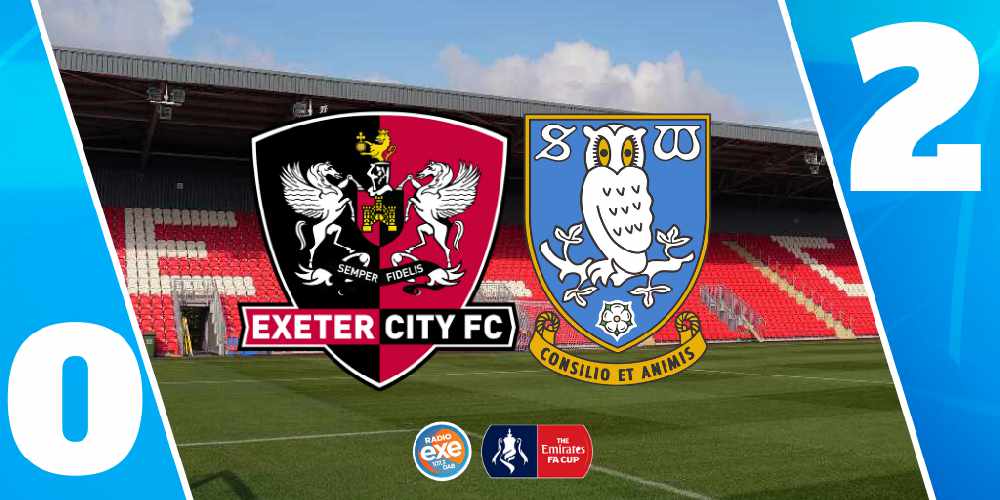 Exeter City’s first game of the new year ends in defeat as covid-hit Sheffield Wednesday pick up their first-ever win against the Grecians.

The visitors won 2-0, thanks to goals by Adam Reach and Callum Patterson either side of half-time.

City, who are two divisions lower than the Championship relegation strugglers, missed the opportunity to progress into the fourth round of the FA Cup for the first time in 40 years.

The League Two promotion chasers couldn’t take advantage of Wednesday’s inadequate situation - the Blades, who beat Wayne Rooney’s Derby on Friday, were hit with a major covid outbreak last week. Several of their players, and their caretaker manager Neil Thompson, were unavailable for today’s televised clash. However, Exeter couldn’t capitalise.

City manager Matt Taylor, meanwhile, opted for his strongest possible starting 11 – and the team was bolstered with the return of Lewis Ward, Lewis Page and Josh Key.

The hosts proved problematic to Wednesday’s defence early on and they came agonisingly close to taking the lead inside ten minutes, on two occasions. Matt Jay, City’s top goal scorer this season, headed just wide from five yards out after a delightful cross from Joe Randall. Ryan Bowman had another great chance inside the box soon after – but the centre forward’s tame shot didn’t trouble the goalkeeper.

Exeter played some nice football in good areas and the visitors weren’t causing them any major issues at the back, but the Grecians’ hard work was undone when they conceded a soft goal from a long free kick on the half hour mark - Adam Reach was on the end of it to fire the ball past Ward from a tight angle. Exeter trailed 1-0 at the break.

It was another good start to the half from City. Academy graduate Jack Sparkes replaced Lewis Page at the break - and the young left back made instant impact. Sparkes whipped in a dangerous ball and won his side a corner – McArdle was at the back post to direct the ball towards goal with a looping header, but somehow the keeper saved it on the line.

That was as close as the Grecians came to equalising. Despite four more substitutions, Exeter were unable to breach a solid, well drilled Sheffield defence.

On the stroke of full-time, the visitor’s victory was confirmed. Callum Paterson scored a tap in from two yards out.