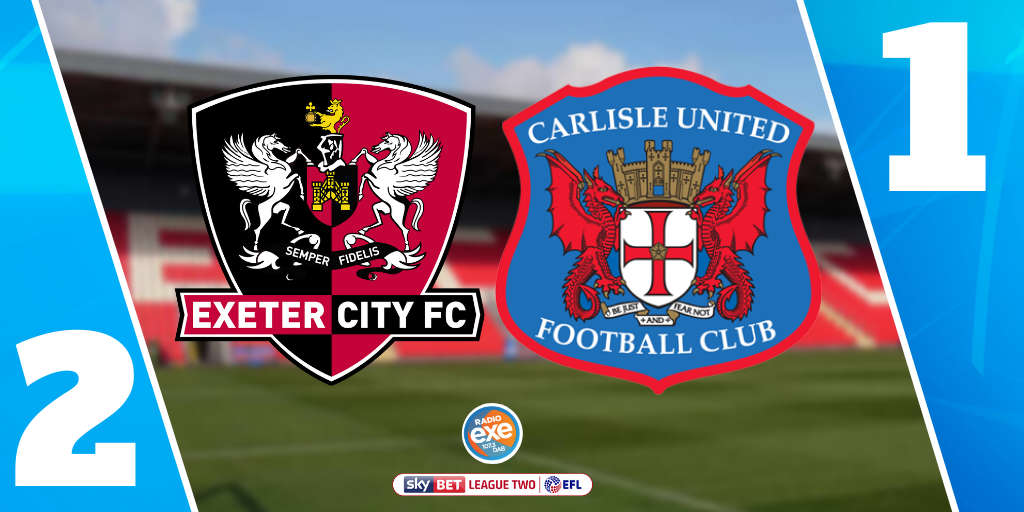 City’s unbeaten run extends to 20 games in all competitions

It’s now five wins in a row for Matt Taylor’s side, who showcased yet another superlative display in front of 4,700 spectators at St James Park.

The Grecians remain in the automatic promotion places, Carlisle, however, who made the 700-mile round trip to St James Park, slip into the relegation zone.

Josh Coley was one of three changes Taylor made from last time out, it was the winger’s first start for the club since joining from Maidenhead in June.

The visitors started the game brightly and bombarded City’s box with an early string of corners – and they nearly took an early lead. Brennan Dickenson hit the side netting before firing a shot over the bar from 20-yards out.

Exeter’s first shot on goal, meanwhile, came from Jevani Brown in the 20th minute – his attempt inside the box was saved comfortably by the keeper. Tim Dieng came close moments later, but the keeper parried it away once more.

However, the game turned on its head just before the break when Carlisle’s Jon Mellish was sent off for a two footed tackle on Archie Collins. It ended goalless at half-time – but the hosts were now in full control.

As expected, the Grecians dominated the second half, and they eventually broke the deadlock. After 20 minutes of continuous pressure, Sam Nombe directed a cross into the far corner to give City a deserved lead.

With 15 minutes left to play, City substitute Jake Caprice doubled the lead in fine fashion. The left back ran into the Carlisle box before firing a low driven shot into the bottom corner.

Caprice’s well taken goal looked to have been the winner – but a late goal on the counter from the visitors, in the 85th minute, set up a nervy ending. Jordan Gibson scored from a spectacular low driven cross into the box.

However, despite the late goal, City kept their nerve to secure all three points and pick up their fifth win in a row. It finished: Exeter City 2 Carlisle united 0.