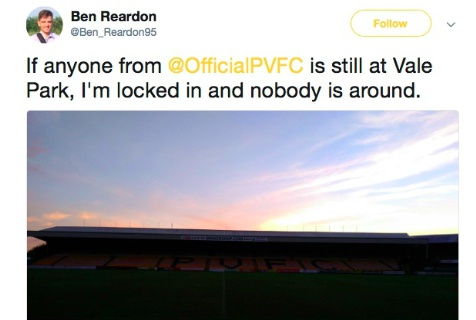 Who turned the lights out?

Football fan Ben Reardon, who watched Port Vale draw 1-1 with Exeter City in League 2 this afternoon, published a tweet after the game seeking help. Somehow, Mr Reardon was "locked" inside the stadium after the match with nobody around to let him out.

The Port Vale supporter published a tweet that received more than 130 likes and 80 shares. Luckily, just under 20 minutes after his tweet, Mr Reardon was set free by the staff at Port Vale.

Just imagine if his phone died and he had no point of contact, what would he do... Spend the night there?

Turns out he was delayed as he was still counting every blade of grass @TomConlon7 covered today. More to follow... https://t.co/MZgnLsftbF

Meanwhile, Exeter City were denied all three points at Vale Park. Despite leading 1-0 through a Nicky Law goal, the hosts equalised in the seventh minute of stoppage time to deny the Grecians a hard earnt victory.