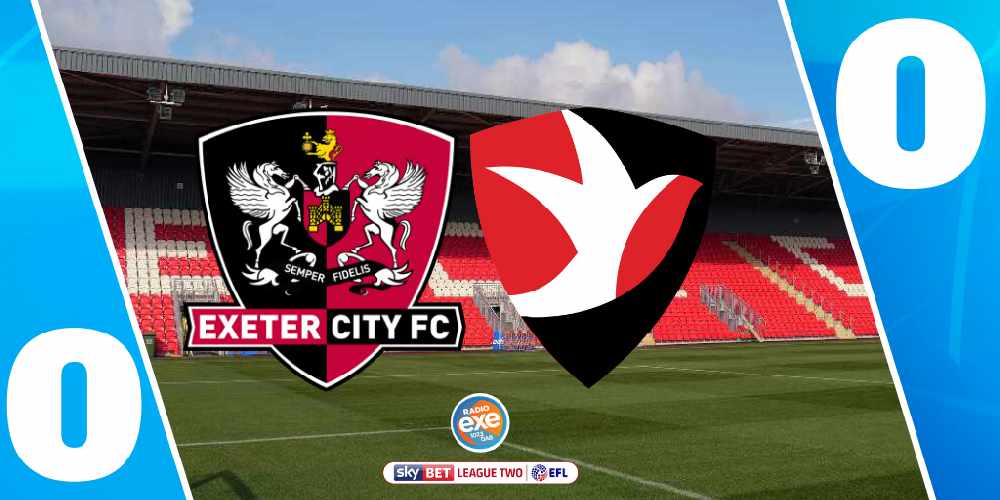 Matt Taylor's men controlled much of the game, but couldn't break the deadlock

Exeter City were left frustrated as, despite being the better side, they played out a goalless draw with promotion rivals Cheltenham Town at St James Park in League Two.

City were above just above their opponents in the league table coming in to the game, but they had stuttered recently, winning two of their last eight. In contrast, Cheltenham were one of the league's form sides - suffering defeat in just one of their last nine.

Boss Matt Taylor made two changes from the side that secured an FA Cup 1st round replay at Cambridge last weekend, with Dean Moxey and Jack Sparkes replacing Craig Woodman and Tom Parkes.

The Grecians started the game the better side and had the first opportunity midway through the first half. Their goal-kick found a surprised Ryan Bowman through on goal, only for him to drag his strike wide.

Soon after, winger Jack Sparkes worked a good position on the edge of the area and unleashed a fizzing strike that forced a save into visiting goalkeeper Scott Flinders.

City kept up the pressure and very nearly caught Cheltenham trying to play out from the back on the half-hour mark. A slip from a Robins defender allowed Randell Williams to play the ball across, but Alex Fisher was stuck on his heels, enabling a grateful Flinders to gather.

Pierce Sweeney was then afforded the last opportunity of the first half when he met a low Sparkes cross. Whilst it was goal-bound, the shot was straight at the away stopper.

After an improvement following the interval from the previously lacklustre Cheltenham, the home side soon retook control of proceedings. Williams saw a shot well blocked before another teasing Sparkes cross narrowly avoided Fisher, who flung himself at the ball in the hope of making contact.

The visitors had barely tested the Grecians defence but they were called into rare action on the hour mark when veteran striker Luke Varney, formerly of Portsmouth amongst others, was played through on goal, only for Aaron Martin to make a vital last-gasp block.

At the other end, a poor clearance by Cheltenham's Chris Hussey bobbled up in the box to the benefit of Exeter substitute Lee Martin, who looked to be shoved over as he tried to shoot from close-range. The referee Alan Young, however, was unconvinced by his penalty appeals.

The tempo of the match became ever-more frantic as both sides sensed they could sneak a late victory, especially the hosts. In Randell Williams they had the best player on the park, and the 22-year-old came close to breaking the deadlock. He cut inside onto his favoured left foot and curled a fine strike agonisingly wide of the far post.

The Grecians continued to pile forward without creating the clear-cut opportunity they craved, but it was very nearly the Robins who snatched all three points. Alex Addai's low cross found the on-rushing Conor Thomas, but he dragged his effort wide.