Grecians and Colchester play out stalemate 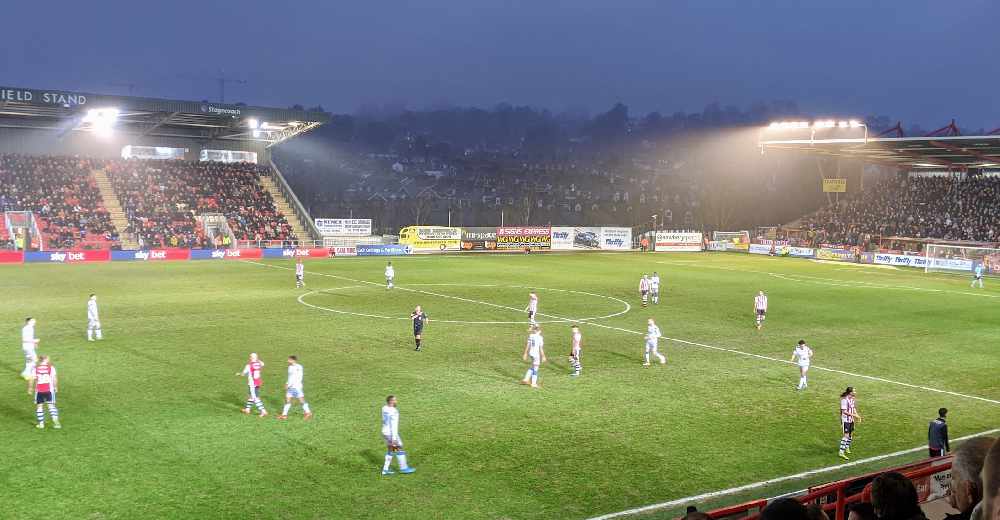 Exeter City played out a goalless draw with promotion rivals Colchester United at a cold and misty St James Park, but very nearly won it at the death.

Both sides came into the match on impressive unbeaten runs. Second-placed City had not lost in ten league matches stretching back to the start of November, whilst play-off contenders Colchester bettered that with a run of 14. Perhaps no surprise that this contest therefore ended all-square.

Amid a frantic opening few minutes, an excellent through ball from Randell Williams found Exeter’s strikers through on goal, but Ryan Bowman decided to go it alone when his partner Nicky Ajose was in acres of space. In the end his shot was blocked.

The game then largely petered out until the interval, though Colchester will wonder how they didn’t go into the dressing room a goal to the good. After full-back Jayden Richardson was dispossessed in a dangerous area, a cross found Callum Harriott whose close-range strike was remarkably cleared off the line by the diligent Pierce Sweeney.

A similar pattern ensued for the start of the second half - even with Colchester perhaps edging the best of the play. However the Grecians produced another golden opportunity just after the hour mark.

Nottingham Forest loanee Richardson was played in down the right-hand side and only had to pass to unmarked teammate Ajose, but opted to drag a shot narrowly wide. Ajose struggled to contain his fury at not being picked out for what should have been a second tap-in of the game.

The U's continued to huff and puff, creating a few half-chances, and nearly broke the deadlock when the impressive youngster Kwame Poku forced his way into the box, only for his shot to be well-blocked.

But the Grecians managed to just about keep their visitors at bay in the final stages, and almost snatched a winner at the death. The lively Richardson's run into the box was interrupted by a Colchester man, before Nicky Law poked an effort agonisingly wide.

From the resulting corner, Archie Collins unleashed a fierce half-volley that was well parried by United goalkeeper Dean Gerken, to preserve what was a deserved share of the spoils, along with both sides' respective unbeaten runs.