Grecians come from behind to beat Northampton 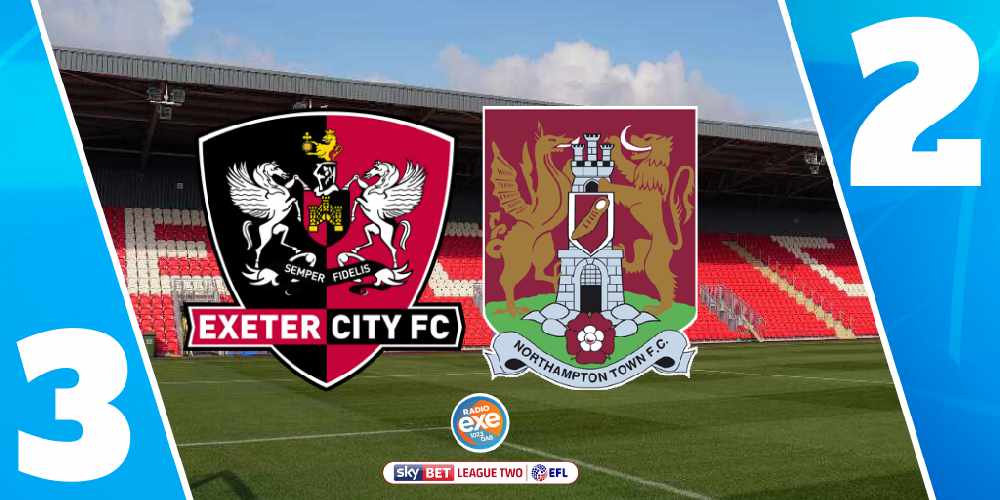 Goals from Randell Williams, Aaron Martin and Alex Fisher did the damage as Exeter made it back-to-back wins in the league.

Inside an action packed first-half, it took eight minutes for the first clear cut chance. City’s centre forward Ryan Bowman made a good run, starting from the half-way line, before curling a shot just wide of the far post.

Bowman’s partner up front Alex Fisher came close a few minutes later. Nigel Atangana hooked in a good ball towards the 28-year-old – but Fisher volleyed it over the bar.

Northampton looked threatening down the other end and had a couple of good opportunities before taking the lead. Andy Williams headed over from five yards out and City’s Aaron Martin made a crucial block inside his box soon after.

However, after applying heavy pressure, the visitors eventually found the back of the net. Charlie Goode’s low driven shot on the edge of the box whistled into the bottom corner.

The Grecians responded immediately, though, and soon found themselves on level terms. Randell Williams showcased a moment of individual excellence to produce the goods. The winger cut inside two defenders before unleashing an effort from 20 yards out – which beat the goalkeeper at his near post. At half-time it ended Exeter City 1 Northampton 1.

Exeter started the second half on top. The host controlled possession and created a few good chances early on - Jack Sparked hit the post with a brilliant curling free kick, Nicky Law headed wide from close range and Archie Collins had a promising shot blocked on the edge of the box.

The home fans could sense a much-deserved goal was coming – and inside two minutes, City scored twice.

An in-swinging cross from Williams was put on a plate for Aaron Martin – who headed home from five yards out. Seconds later, following another cross, Fisher tapped the ball into the net from close range.

Setting up a nerve racking final 10 minutes, Northampton made a rare attack at goal and capitalised in the 80thminute. From outside the box, a low driven shot was directed into Johnny Maxed’s bottom corner.

City did well, however, to survive the late pressure and maintain their narrow lead. It finished: Exeter City 3 Northampton 2.