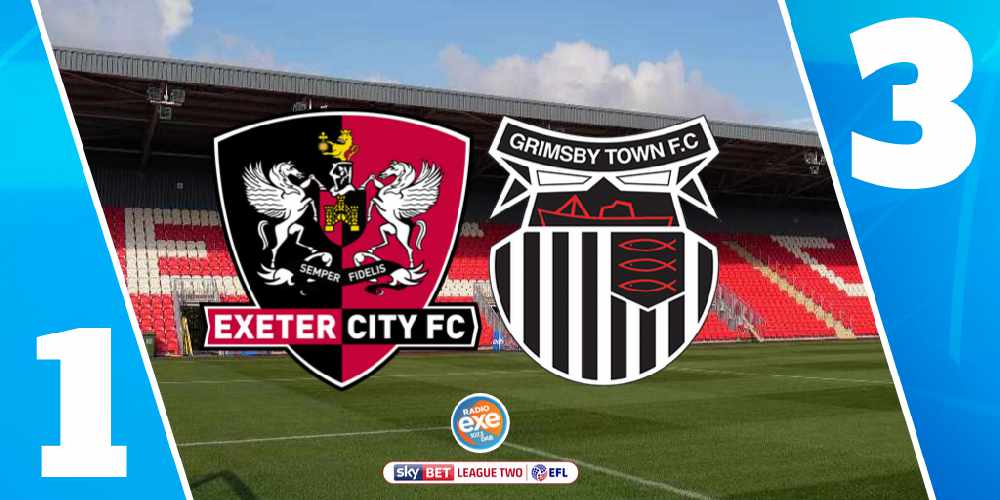 It was a case of unlucky 13 for Matt Taylor's side

Ethan Robson's classy strike from the edge of the area gave Michael Jolley's men a narrow lead at half-time, before Moses Ogbu's penalty and a second from Robson added gloss to the victory in the second half, despite Ryan Bowman's late consolation.

Grecians boss Matt Taylor kept with the same side that gained a good point at fellow promotion candidates Newport County last week, hoping to make amends for an unfortunate 2-1 defeat in this fixture last season.

For Grimsby, it was a case of back to normality following their cup excursions in midweek. They were thrashed 7-1 at Chelsea, making six changes as a result.

After a quiet opening to the game, Lee Martin brought the first chance of proceedings when, after twisting and turning on the edge of the area, his curling effort forced a routine save out of away stopper James McKeown.

Grimsby then had their first opening of the afternoon. A mistake by City defender Dean Moxey found Akheem Rose one-on-one with Lewis Ward. However the Mariners forward dallied on the ball, allowing the somewhat relieved hosts to clear their lines.

That failed to affect Grimsby, though. Soon after, a short corner found the left foot of Ethan Robson, who bended a superb strike past a helpless Ward into the top corner to send 261 travelling fans into raptures.

Despite City huffing and puffing, the team in blue were dominating the play, and almost made it two before the interval; forward Ogbu lashing a shot over the bar after it fell kindly to him on the edge of the box.

The Grecians then came close to levelling the scores before half-time. City academy graduate Jack Sparkes' fine long ball was teed back to Nicky Law, only for his close-range effort to be blocked.

And moments later, they should have equalised. Sparkes' excellent cross was begging to be headed home, but the frustrated Bowman failed to make contact when the net should have bulged.

Matt Taylor made a change before the second 45, Sparkes being replaced by Nottingham Forest loanee Jayden Richardson, and the wing-back was immediately in the action. His header into a crowded penalty area found Bowman, but his low strike was blocked by a visiting defender.

A remarkable passage of play then followed. An Exeter cross was tipped onto the bar by McKeown, only for the ball to find its way back into the goalmouth, where it was cleared - shaving the crossbar again - on its way out.

City's rapid start after the restart showed no signs of abating moments later, the lively Martin heading a corner narrowly over the bar.

But that encouraging opening quarter-of-an-hour of the second half counted for nothing when Dean Moxey's clumsy challenge from behind brought down Max Wright in the area. One of the easier penalty awards for referee Brett Huxtable. Ogbu made no mistake, doubling Grimsby's lead after 59 minutes.

Shortly after they added another. A good ball into the area found the dangerous Ogbu, whose composure helped set up Robson for his second of the afternoon.

Matt Taylor introduced strikers Alex Fisher and youngster Ben Seymour in the hope of getting his side back into the match, and the former came close to doing so. He met Nicky Law's cross with a firm header six yards out, which was kept out by a fine point-blank save by McKeown.

City thought they had a penalty moments later. Jayden Richardson looked to be felled, only for referee Huxtable to wave play on and book Grecians boss Taylor for his overly-passionate touchline protestations.

Exeter did pick up a consolation late in injury time, Bowman finally getting his goal after making the decisive touch on a pinpoint Randell Williams' free-kick, but it failed to affect the result and prevent a first league defeat of the campaign.