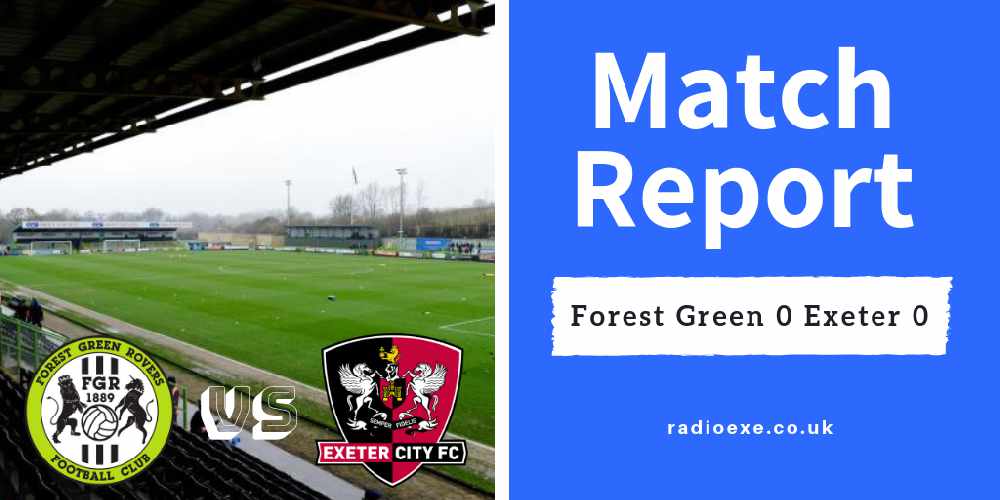 The season has come to a nail biting end, but unfortunately for Exeter City, they haven't secured a place in the play-off's.

Three points were required against Forest Green Rovers this afternoon if Exeter were to stand any hope of reaching the play-off's for the third successive season.

City controlled the game, constructed the best chances, but failed to find the back of the net in a frustrating goalless draw at The New Lawn.

More than 1,200 Grecian supporters made the 100 mile journey to The New Lawn - the smallest ground in League 2.

👏 More than 1,000 Exeter City supporters have arrived at The New Lawn ahead of City's penultimate game of the season against Forest Green Rovers...#ECFC pic.twitter.com/IGY9JexgPO

City manager Matt Taylor made two changes to the side that beat Oldham last week. Due to injury, Exeter's Player of the Year mastero Nicky Law was replaced by Hiram Boateng and Lee Holmes came in for Randall Williams.

Exeter thrived under the pressure and dominated the opening 45 minutes with an impressive display. However, Matt Taylor's men weren't clinical enough in front of goal to take a fully deserved lead at the break.

Inside the opening 10 minutes, it was the visitors who created the first shot on target. A superb long ball from Craig Woodman found Ryan Bowman who cushioned the ball down well, but his low shot was saved by the legs of James Montgomery.

Pushing hard for the opener City had two glorious chances in quick succession - but they couldn't capitalise.

Bowman, who was nominated for April's League 2 Player of the Month, chased down a kick from the goalkepper, and with the ball at his feet, the 27 year-old had an open goal to put it in. However, on the turn, his effort from outside the box went agonisingly wide of the target.

Minutes later, Bowman made a terrific run down the right hand side to whip in a delightful cross for an unmarked Lee Holmes. But the winger's effort from five yards out went over the bar.

Nearing the end of the half Bowman, who proved a nuisance to the Forest Green defenders, headed the ball against the post and his teammate Hiram Boateng saw his headed effort direct just wide shortly after.

A promosing opnning half for the Grecians. It ended Forest Green 0 Exeter 0 at the break.

Exeter began the half where they left off in the first. With their tales up, they set camp deep inside Forest Green's half and constructed another two wonderful opportunities that went begging. On the edge of the box, in good positions, both Lee Martin and Archie Collins fired shots over the bar.

The disappointing draw wasn't enough to secure a competitive play-off spot for the third year running.