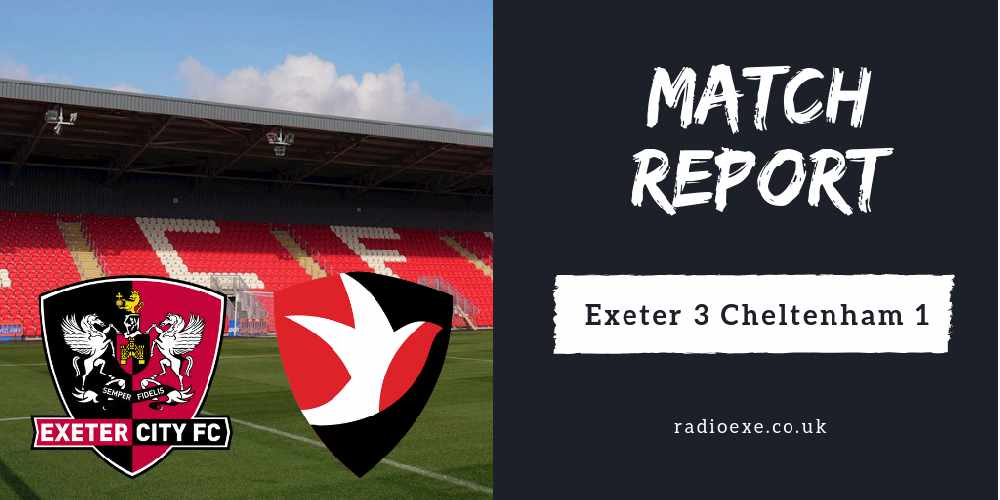 It was an error filled opening 45 minutes for Exeter who found themselves 1-0 down at the break. However, In the second-half, they looked like a different side. Pierce Sweeney’s thunder strike brought them level before Jayden Stockely and Johnathan Forte added two more.

The win, Exeter’s sixth this season, keeps them second in the League 2 table.

The Grecians made one change to the side that beat Mansfield last week, Lee Martin replaces Lee Holmes.

Cheltenham frustrated Exeter early on, and the visitors looked favourites to score the opening goal.

However, the Grecians had their chances to take the lead. Nicky Law whipped in a delightful corner towards the head of Jayden Stockley, the towering centre forward headed the ball towards goal but saw his effort hacked of the line. Moments later, Law had the ball in the back of the net, but to the delight of the travelling supporters, it was judged off side.

With just 5 minutes to play in the first-half, Cheltenham took the lead. It came from an Exeter mistake. City’s Dean Moxey misplaced his pass which found the feet of Immanuelson Duku who pulled the ball across the face of goal for Ryan Broom to score from eight yards. It finished 1-0 at half-time.

Whatever manger Matt Taylor said at half-time, it worked a treat. City began the second-half with real determination and threat – they looked a team possessed.  Following a succession of crosses and mounted pressure on the visitors defence, Exeter’s Pierce Sweeney unleashed a sweet half volley outside the box to level the scores.

The rain continued to fall at St James Park, but it didn’t dampen the home fans spirits, the supporters on the Big Bank could be heard In the high-street as they pushed  their side to score a second. And they nearly did. Coming in from the left, Dean Moxey drilled a shot across the face of goal which agonisingly skimmed the post.

All of a sudden, the Grecians were in the driving seat. Another looping ball into the box was headed onto the top of the net by Stockely. Moments later, Lee Martin had his close range shot saved by the goal keeper. A goal finally came when Stockely prodded home from five yards out. City put the game to bed when substitute Jonathan Forte broke free to slot home the third.

City’s defence kept Cheltenham at bay to finish the game 3-1 at full-time.