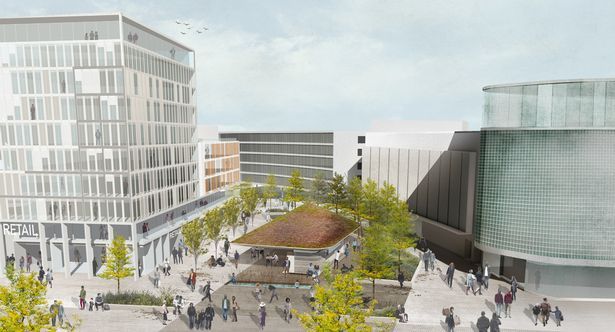 Plans will now go to full council next month

Members of Exeter City Council’s Leisure Complex and Bus Station Programme Board on Tuesday night backed the vision for a £300m redevelopment in the city centre.

They agreed to increase the budget for the St Sidwell’s Point project from £39.92million to £51.8million, and to spend £390,000 to identify a partner for the wider redevelopment and exploring the potential of a new multi-purpose performance venue, with a capacity of around 1,200 seated or up to 2,500 standing in the area.

And councillors heard that there is a contractor ready to come and build the leisure centre and bus station.

Surveyor Phil Lewis told the board: “We have a contractor committed to the scheme who is ready to sign up and build, and commit to a passivhous design, which is a risk for a contractor. They are now comfortable that they can deliver the scheme we want in the quality that we want.”

Exeter City Council’s chief executive Karime Hassan told councillors that it would have been far easier and cheaper for the council to deliver this scheme on the edge of Exeter.

He said: “But that would have done nothing for the city centre. The city centre is responsible for 40 per cent of our income and the high street is already struggling. Putting this development in the heart of the city means public can get their by public transport and 40,000 live within a mile’s walk of the site.

“But it comes at a price. We need to protect the city centre with a high quality design and this will be a sustainable building that leads the way in environmental performance.”

Asking for the budget to be increased, Mr Hassan said: “The £11.8m will mean the contract can be signed and they can get on with the work. You could choose to leave it and not go ahead with the project, but then we won’t be able to deliver the rest of the vision for the site.”

The wider regeneration scheme includes 250 build-to-rent homes on Sidwell Street, a four star hotel opposite John Lewis, a budget hotel in Sidwell Street, relocation of the Civic Centre, which would then be turned into homes, a new office quarter, food, drink and retail outlets, a new square and civic space in Paris Street, and the potential for a multi-purpose performance venue, with a capacity of around 1,200 seated or up to 2,500 standing. Paris Street may be pedestrianised as part of the plans.

Mr Hassan added: “Compared to Princesshay, this site is significantly bigger than it and including the leisure centre and bus station, it is nearly twice the size. The size of the development is huge. Princesshay cost £225m, this is £250m of private investment and £50m from us. The Crown Estate scheme was around £100m, so shows how big this is.

“There is a strong demand for this and since the story was published in the paper last week, we have inundated with enquiries for the hotels, build-to-lets, and developers who want to work with us, and this will tackle the shortage of available office accommodation in the city at the moment.”

He added: “No-one is building speculative offices in the city and that is a problem for us. The easy thing is for us not to do it, but the city needs it as the high street needs the office lunchtime trade. This gives us an opportunity to do it.”

Cllr Pete Edwards, leader of the council, said that although these were just drawings right now, the scheme was a great opportunity for the city.

He said: “It is fantastic and exciting for the city and would see it thrive for another 50 years.”

Cllr Phil Bialyk, Lead Councillor with Responsibility for Bus Station Redevelopment, said: “The new vision for the redevelopment of this site has been widely welcomed.

“It has been a long term aim of the council to create a much needed new leisure complex and bus station, and we look forward to the main construction work starting on site very soon.

“It is important that we start looking at the vision we want. We are making Exeter a destination city and despite the county council’s non-involvement in this, we will go ahead and build a new bus station for the city.

“Our desire has been clear that we don’t want student accommodation for this. We are doing what people want and what they have asked for and are looking at providing everything they say they wanted. I think it is a cause for some congratulation for the team for this proposal and to bring it forward and it will give us a decent and much-needed high-quality leisure facility in Exeter.”

A meeting of the full council will be asked to give final approval in December to spending the extra money on the bus station site.