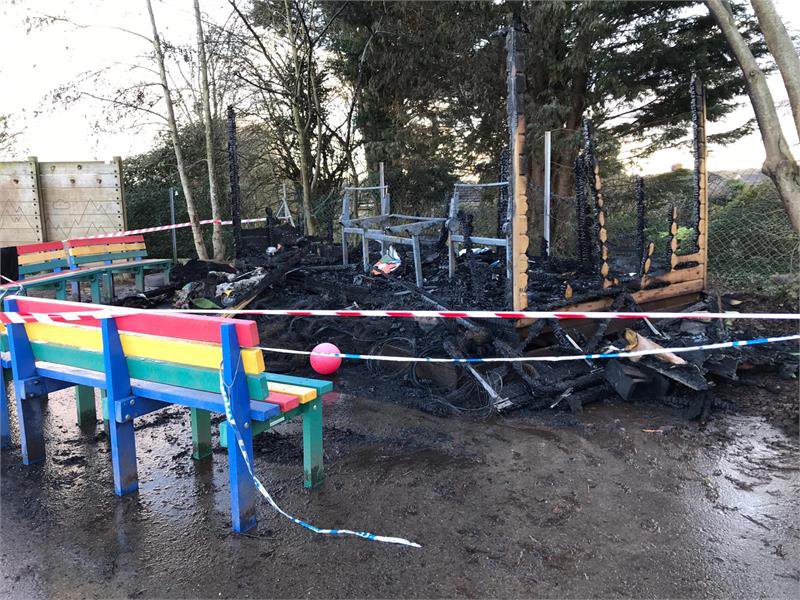 Local residents are appealing for help for an Exeter primary school that lost £9,000 of sports and electrical equipment in a fire.

Pinhoe Primary School was targeted by arsonists shortly before midnight on Thursday 4 February. A wooden outbuilding was completely destroyed in the blaze. That will cost £1,000 to replace.

By Monday morning, a fundraising site had already raised £3,000 towards the cost of replacing the building and its contents.

Jodie Parsons who has set up the fundraising page says: "This is devastating for the local school and community which has been open for many years with generations of local people attending. The staff and pupils are amazing and especially over the tough last year do not deserve this.

Let’s raise the funds so the kids can return with the PE equipment they deserve when the school reopens its gates again."

The police suspect young people are to blame for the arson. Sergeant Emma Storey-Barrett of the East Exeter neighbourhood policing team, said: “There is a clear trend of escalating antisocial behaviour (ASB) and sadly criminality in this area during the recent few months.

“There is evidence that these crimes may have been committed by younger people and we have been progressing those identified by means of the ASB escalation process with parents. Finding out named suspects for offences after the fact does prove challenging and leaves venues which includes the primary school and Saracens Rugby Team, which train there, footing the bill for repairing the damage.

“We will be tackling this in a number of ways over the coming weeks, including introducing street marshals in partnership with Exeter City Council.   Anti-social behaviour will not be tolerated.

“We would like to remind everyone that we remain in a national lockdown and that children shouldn’t be out in groups during late evening hours.”

The fundraising page is at: https://bit.ly/36QKcZE