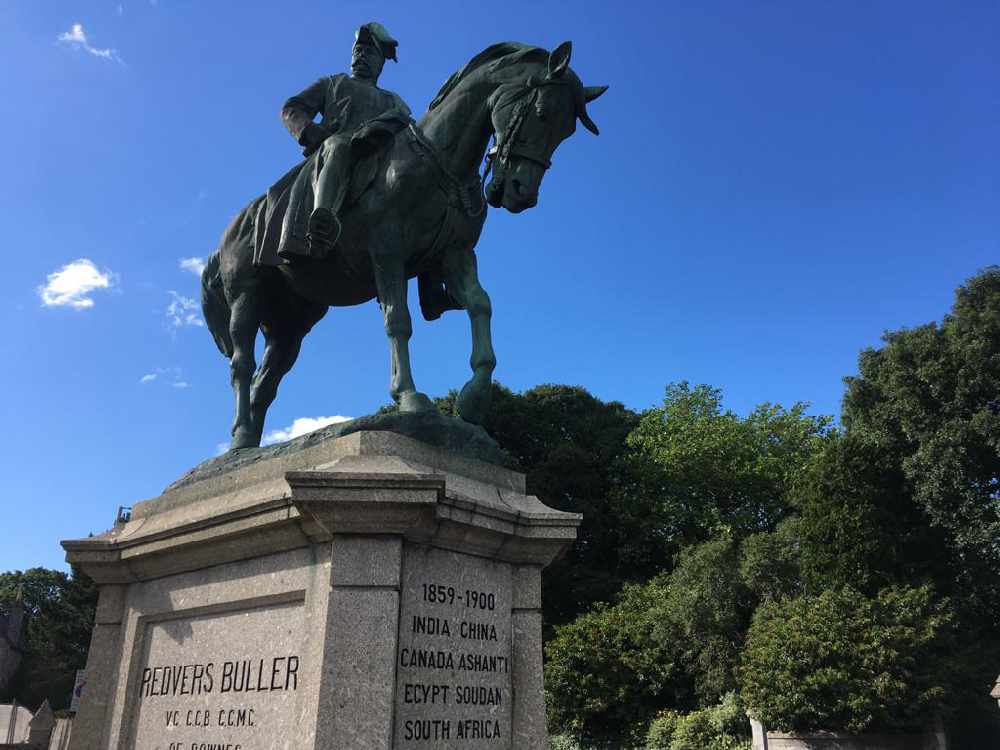 People not to be asked for views after all

General Sir Redvers Buller, under threat of forcible removal from his home for more than a century, has been reprieved.

The controversial Victorian general has been astride his horse Biffen since the statue was unveiled on Hele Road, Exeter (by the Crediton knight himself) in 1905.

Sir Redvers initially enjoyed a distinguished military career, before a number of botched battles and a big falling out with top brass. His plinth in Exeter says; "He saved Natal" but some believe his attacks on Zulus where the British were trying to claim more land in Southern Africa, reflected racist and colonial views.

So calls have been growing for him to be pulled down. He's owned by Exeter City Council and sits on land owned by Devon County Council - and will cost around £25,000 to be shifted. Some have suggested the Royal Albert Memorial Museum may be more appropriate for him than outside a college.

Now Exeter city councillors have unanimously voted to withdraw proposals to shift man and horse. In January, the council's leaders had agreed that an application should be made for listing building consent to move him, although it any final decision would be made by the full council, where Labour holds the majority of seats.

This week the full council decided not to go ahead applying for consent and not to let local people have their say in a formal consultation over the future of the statue.

The secretary of state for housing, communities and local government Robert Jenrick recently said such applications are unlikely to be successful. The government is planning a new law on cultural and historic heritage which will “make clear that historic monuments should be retained and explained’.

Cllr Phil Bialyk, leader of the council, said: “In light of the comments by the Secretary of State my executive will be asked to amend the recommendations, and we will not be submitting a planning application to relocate the Buller statue.

“There is no proposal to remove the Buller statue. I hope that is clear and we are not talking about that at all.”

The executive though reaffirmed their support for the other recommendations that they had made back in January over the statue, in that the portfolio holder for culture and communities should establish a working group to develop an anti-racism strategy for the council.

An arts-based engagement project with residents is also set to be established, through a public art working group in conjunction with the University of Exeter and Exeter Culture, to consider the role of public art and create a new public art strategy in the city.

Temporary information boards are still set to be erected near to the statue, while consideration it set to be given to whether the statement “He saved Natal” on the plinth should be removed.

Last year, a review into the ‘continued appropriateness’ of the was launched due to the army general’s connection to the British Empire and because of the names carved on the plinth of colonial campaigns which sought to advance British imperialist interests in other countries.

That review had concluded that without prejudice to a final decision on the matter, an application should be made for listing building consent for the relocation of the statue to an alternative location.

A full public consultation would have taken place over the future of the Buller statue before a final decision would be made by the full council at a later date, but following the Government’s announcement that they would change the law to block such proposals, the statue will not be moved.

Sir Redvers served in Canada, China and in Southern Africa in the Zulu Wars. It was here an operation led by him went wrong and he had to withdraw under intense fire.

The statue of Buller on his horse has previously been vandalised, as in 2019 an anarchist symbol and the word “scum” have been daubed on the statue, while banners saying ‘wanting for war crimes’ had also been hung on it.