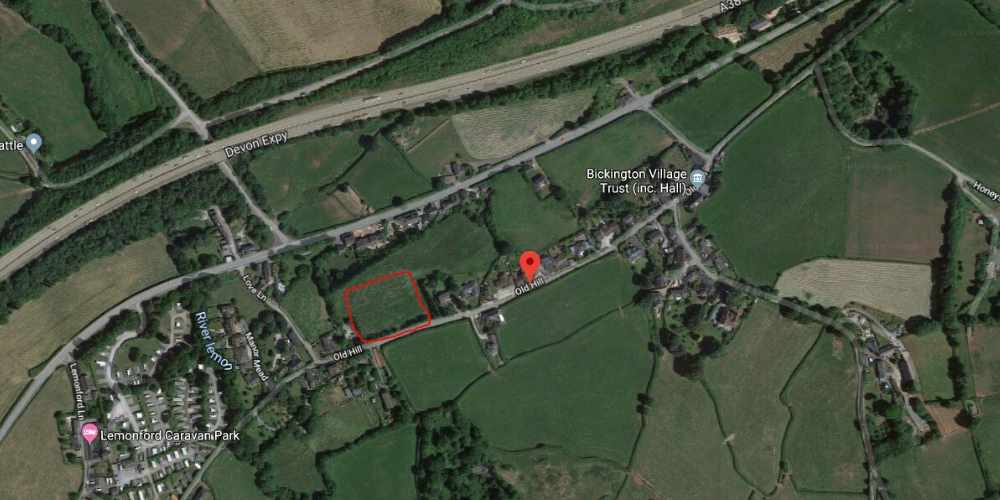 The village was singled out as ‘dead’ by BBC’s Countryfile – but plans to breathe new life and build new homes for the first time in 50 years looks set to be rejected.

Bickington – a village that lies just south of the A38 near Newton Abbot – became the unlikely centre of attention when Countryfile pointed the finger at it as a village that has lost its community amenities – and its mojo.

Residents had said the decline of the village was partly down to a planning issue as in the 1990s, a village plan was drawn up with an emphasis was on preserving Bickington’s charm and quaintness, by blocking any new homes being built.

South West Wholesale Ltd have put in plans for a residential development of land to the north of Old Hill, Bickington, which would see nine new homes built – four of which would be affordable.

However, the site is literally the wrong side of a historic line on a map and therefore it is classed as being within the open countryside for planning purposes and therefore development would be contrary to the Teignbridge Local Plan.

As a result, Teignbridge District Council planning officers are recommending that councillors refuse the application when it goes before them on Tuesday.

Recommending refusal, the report says: “The proposed development would constitute the provision of open market housing within the open countryside, contrary to policy. While an element of affordable housing is proposed, the application is not accompanied by a viability assessment which evidences the requirement for the open market housing to cross subsidise the delivery of affordable homes on a rural exception site

“Only 44 per cent of the homes proposed as affordable. Despite a request to the applicant to provide viability evidence as to why the market units are required, no viability evidence has been submitted. The application is therefore clearly not compliant with policy.

“The Local Plan is permissive of housing in the countryside, however, these sites must provide 100 per cent affordable housing.

“This scheme is considered to be a market housing led development. It is considered that, if this development were to be allowed with the lack of any evidence as to why it cannot conform to Local Plan Policy, it would make any site that comes forward which does not demonstrate policy compliance acceptable, and effectively would render the policy ineffective.”

A second reason for refusal, relating to insufficient information supplied to demonstrate that the proposal would not have a harmful impact on protected species, is also raised by officers.

The application though has been called-in by local councillors. Cllr John Nutley and Cllr Huw Cox said that they consider the small development will allow members of families’ living in Bickington to stay within the village and allow those that have had to move away due to lack of housing being able to return to the village.

The application has also been supported by the parish council, with letters of support from residents saying that it would be seen as a means to enhancing the village.

Messages included that it will improve the quality and choice of homes in the declining village, new homes will re-invigorate Bickington which lacks a critical mass which has led to the closure of the pub, post office and a garage, and that it would keep the village vibrant, and that it was sensible infill development.

But concerns had also been raised that there is a lack of parking on Old Hill at the moment and further properties would create even more need for on road parking, nine homes will not revitalize the village, and that Bickington has no amenities whatsoever, no shop, post office, play park or similar and this is unlikely to change even if a few new homes are built.

A statement supporting the application from the developers had said that the proposal constitutes sustainable development and would generate various economic and social benefits, including a number of much-needed affordable housing units and that the settlement limits of both elements of Bickington are drawn to the point that it would be very difficult for meaningful development to be included within them.

But officers are recommending councillors refuse the scheme when they meet on Tuesday morning.

If refused, it would be the second time that the scheme has been turned down. Last year, a near identical version of the application was rejected by officers acting under delegated powers.