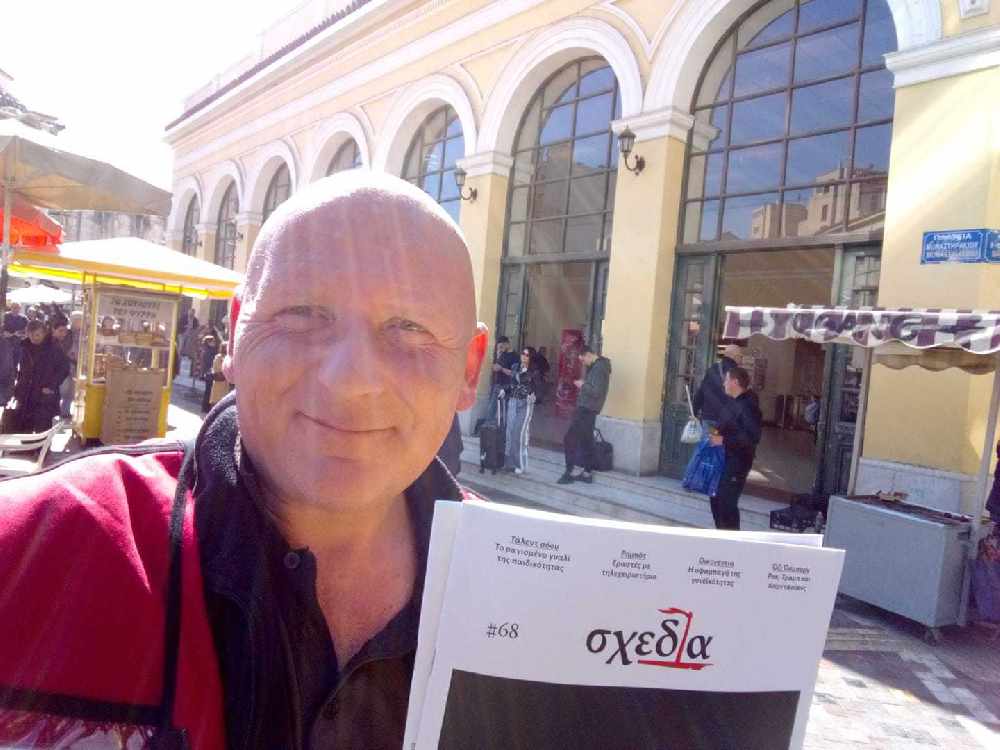 He was banned from selling her after a dispute

Andrew McGarry, who was banned from selling the Big Issue in the UK after a dispute in Exeter, is now raising money by selling a Greek street magazine which supports the homeless in Athens.

Mr McGarry, 52, says he was told he could go abroad as a relocation option when he asked for help from London-based Veterans Aid.

The former soldier says he was given the one-way flight ticket with Wizz Air and pre-paid accommodation at a hotel in Athens after contacting the charity for help on his return from a trip to Spain.

Mr McGarry revealed his new home city on social media, and said he was surprised he was allowed to go abroad when he had no connections or job lined up in Greece.

The charity says the package was a one-off arrangement in response to Mr McGarry’s unique circumstances and not part of a relocation scheme.

Mr McGarry’s flight left Stansted airport on February 28 and he was put up at the Marina Hotel in the Greek capital, where his pre-paid week of bed and breakfast ended on Thursday, March 7.

He said: “I was very surprised that they did it knowing I may not be able to find any work, and having no connections over here.”

Mr McGarry posted a picture of himself on social media selling the Greek street magazine called Shedia, commenting that he believed he was the first British person to do it.

The Athens magazine works the same way as the Big Issue in the UK, with homeless people becoming official vendors and earning money by selling the magazine at a profit.

A spokeswoman for Veterans Aid said: “I can confirm that Veterans Aid has helped Andrew McGarry in a number of ways since 2005, and we did facilitate his trip to Athens.

There is no scheme, this was a one-off arrangement in response to unique circumstances.”

Prices for the Marina Hotel currently range from £44 to £66 a night on hotel booking websites. The cost of a flight to Athens varies according to the time and day, ranging between around £50 and £100.

Most local authorities run relocation schemes, which fund travel back to a homeless person’s home area with pre-arranged support on their return. The policy has been described critics as ‘street cleansing’, but councils say the aim is to get people back where they have family and a support network.

Mr McGarry is well known in Exeter for selling the Big Issue from a pitch near Exeter Cathedral alongside the Royal Clarence Hotel, which was destroyed in a fire in October 2016. He has raised money to support homeless people in several fundraising campaigns.

He was suspended from selling the Big Issue last summer after the magazine said a post on the social media platform Twitter broke vendor rules. The vendor deleted the tweet and apologised, but the Big Issue confirmed his UK-wide ban.

Mr McGarry had earlier boycotted a publicity event when Exeter MP Ben Bradshaw became a Big Issue seller for a day. He believes that incident contributed to his suspension, but the magazine denied it.