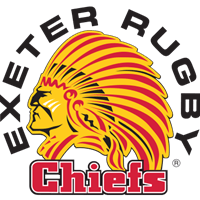 On Armistice Eve, Sandy Park came to a poignant silence ahead of this Premiership Cup match, with a short ceremony to remember

all who fell in the Great War, and in conflicts since, including 25 former Exeter Chiefs players.

When the game got underway, the Chiefs knew a bonus point win would see them go back to the top of pool 1. After a subdued first 20 minutes, in which the only score for either side was a Marcus Smith penalty for Harlequins in the third minute, Exeter finally came to life and built pressure inside the opponent’s 22. After sustained Chiefs forwards pressure, replacement Lock Richard Capstick burrowed over from close range and the second Chiefs’ try was almost a carbon copy of the first, with loosehead prop Billy Keast bulldozing his way over from a metre out in the 32ndminute.

The Chiefs were now in a confident mood. Their third and best try came straight from the kick off from that try, with the ball moved wide to Alex Cuthbert, who burst through the first line of defence and then from the next phase the ball was spun out to the impressive Tom O’Flaherty, who cut inside before racing past the covering Quins’ defence to score a spectacular individual try.

Marcus Smith brought Harlequins back into the match with a successful third penalty. However, with the clock in the red, the Chiefs’ dominant driving maul eventually produced a try for Tom Lawday, to give Exeter the bonus point before half time. Despite Joe Simmonds only being successful with one of his conversion attempts, it still capped an impressive opening 40 minutes from the home team, leaving the half time score Exeter Chiefs 22- Harlequins 6.

After the heavy rain that came down at the end of the first half, the second period was always going to be scrappy, with the ball increasingly hard to handle. However, the Chiefs did produce a moment of magic in the 57th minute, after some neat offloading from the forwards, Exeter moved the ball wide, eventually finding eventual man of the match Tom O’Flaherty in space, who timed his inside pass to Joe Simmonds perfectly, who then sprinted over underneath the posts, leaving himself with an easy conversion attempt to bring Exeter a commanding 29-6 lead.

But Harlequins never gave up and their retention of the ball in the second half was vastly improved from the first. However, the Chiefs’ defence remained strong right up until the final minute when Quins’ replacement forward Dave Ward broke through to score.

The Chiefs now turn their attention back to the Gallagher Premiership to face West Country rivals Bristol Bears next Sunday.