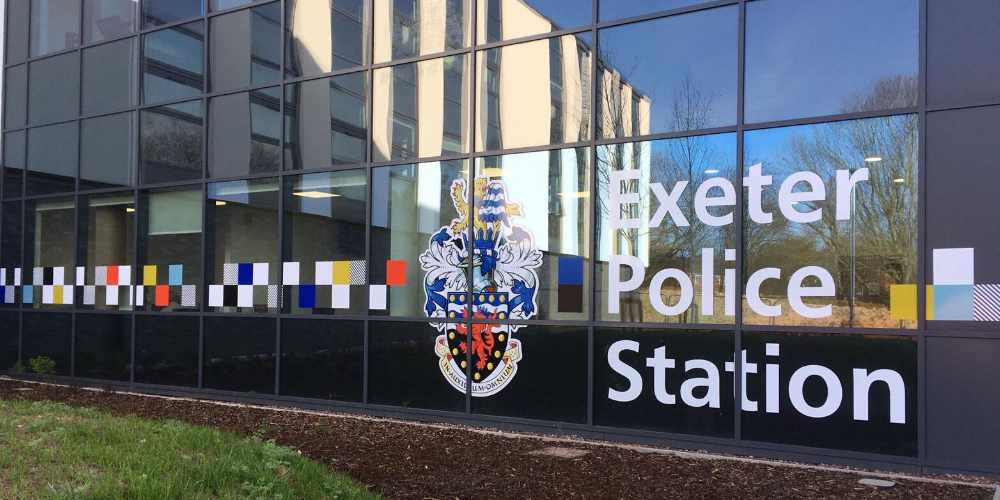 Exeter’s new police station has opened a fortnight early than initially planned as a result of the coronavirus epidemic.

The new police station, located next to Devon and Cornwall Police’s Middlemoor headquarters on Sidmouth Road, opened for the first time at 8am on Tuesday morning.

It will be the force’s Devon police headquarters, completely taking over from the increasingly decrepit Heavitree station which is being prepared to be sold off.

The new building includes an enlarged custody suite with 40 police cells, spread over four separate wings and additional facilities such as access for solicitors and interview rooms.

The state-of-the-art custody cells are better for isolating detainees with coronavirus symptoms than those currently in use, and within minutes of the station opening, the first detainee into custody had arrived – a man arrested for a burglary.

Although the coronavirus outbreak means the police are asking people not to attend the station in person unless absolutely necessary, those who do need to visit will be able to access a modern and clean public enquiry office.

Alison Hernandez, the Police and Crime Commissioner, said: “It feels a bit strange to open a new police station when we are telling people not to come out of their houses, so we are not expecting much footfall, but it is really about the custody facilities and ensuring that the staff and the detainees are able to be kept well and can social distance at this really critical time. There is much more space and ability to keep themselves safe.”

Speaking about the eventual benefits that the new station will bring, Ms Hernandez added that the location of it was far better for access that the old Heavitree Police Station, that it had parking for visitors and was well served by public transport, and that it would be a station for the whole of the Exeter, East and Mid Devon police unit.

She added: “We are always suggesting people do things online, but at the moment, we suggest do everything online you can first and don’t put yourself at risk unless you have to come here, but eventually this new police station will bring great benefits.

“It has already brought a great benefit for the 450 staff who will be based in the building and we are running Silver control for policing to respond to what we are doing around coronavirus from here.

“It sounds strange to build a new police station to change the working practices, but this means everyone will have got the technology they need which means they will be able to do more agile working out of the station that they can do at the moment.”

On the opening being two weeks earlier than planned, she added: ““In a crisis our police force has demonstrated an ability to be extraordinarily agile, and the early opening of the station is an example of that.

“There has been a huge amount of work going on behind the scenes to make this happen – mostly around IT systems, and I’d like to thank those who have put in a Herculean effort to make this happen as one part of our response to this serious public health crisis.”

The new custody centre has 40 cells over three wings, so those with Covid-19 symptoms can be isolated from other detainees. It is made of modern materials so is easier to keep clean and is far more spacious than the facility at Heavitree Road. Some cells are equipped with cameras that monitor life signs, and an audio visual system across the entire custody suite helps to ensure the safety of officers and those in their care.

The station hosts the country’s newest virtual court, meaning trials can continue despite the lockdown.

Ms Hernandez added: “With coronavirus, virtual courts are being pushed out nationally. It means you can bring a detainee in, they can have direct communication with their solicitor and the court, and how their case will be managed and if they will be remanded in custody and all those other things.

“We have been trialling it and hope it will be going live within the next week or so. What it really helpful is that it enables the criminal justice system to carry on through this really tricky time.”

The building is essentially split into two sections connected by a linking corridor. One half is designed to holding suspects in custody. There will be a large custody desk separating two blocks of 20 cells. The cells, each about three meters square will have a bed, sink, toilet and buzzer. Behind the cells are two exercise areas which are lit by natural light from the roof. The floor above the custody suite house machinery allowing them to function properly.

In the other half of the complex, known as South Side, police staff and officers will work in modern facilities. The building will replace the current Heavitree Road station which is more than half a century old and considered so dilapidated as to be almost impossible to work in.

When work on the project began back in 2018, Ms Hernandez added that the new police station in Exeter would be fit for 21st Century crime-fighting.