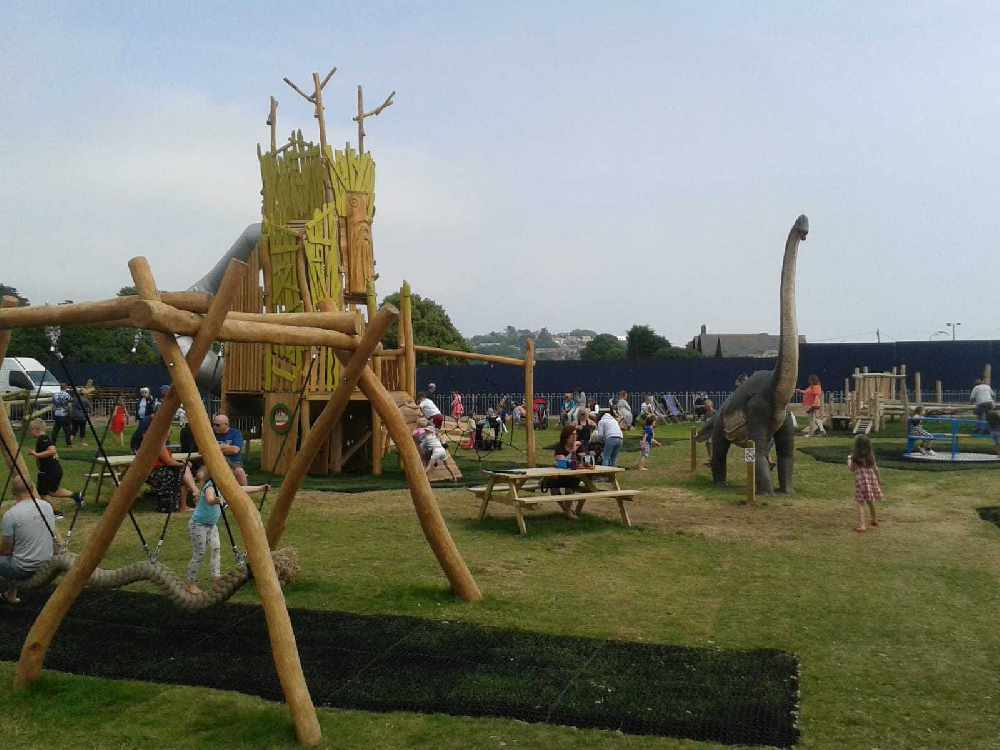 Nearly 10 years after redevelopment plans for Exmouth seafront were first proposed, a longer term vision for the site that will "delight visitors" will come forward soon.

In 2012 plans were introduced to redevelop the area between the old lifeboat station - now a rowing club -  and the Maer. Since then, several iterations of plans have failed, with the scheme being referred to as ‘Exmouth’s Brexit’.

While phase one – the relocation of the Queen’s Drive road – and phase two – the watersports centre – have been completed and are open, phase three remains in doubt.

Planning permission for the redevelopment of a 3.6-hectare swathe of Queen’s Drive has been granted, and has been implemented, the council says, with the realignment of the road, but the attractions currently on the Queen’s Drive space – the replacement for the former Fun Park – only have planning permission until March 2022, with no further extension allowed under planning law.

Plans for the longer term future will be presented to the Queen’s Drive Delivery Group in September and they will consider uses next season.

Cllr Nick Hookway, chair of the group said: “The Queens Drive Delivery Group considers that the Phase three site offers great potential for a range of attractions that will delight visitors. Plans will be shortly considered on what attractions can be put in place to celebrate the Queen’s Platinum Jubilee in June 2022.”

Cllr Paul Arnott, leader of the council, added: “Since taking over the administration a year ago we have placed Exmouth seafront and town at the centre of our efforts. We have tried hard to maximise councillor and public engagement and having sorted out summer 2021 our focus will turn to the long-term.

“The seafront has been a divisive issue for the community, and we are determined to proceed with consensus and with respect for local views.”

Additional funding for a staffing resource to support the phase the project and other projects in Exmouth over the next two years has been agreed with recruitment for these posts to follow shortly.

“Once these staff are in place they will be building on the initial work that has been undertaken in recent months on the Levelling-Up bid working with key stakeholders in Exmouth,” a council spokesman said.

“They added: “The Queen’s Drive Delivery Group which for the past nine months has met in public is next meeting in September and will consider uses for the area next season and in particular the planning implications of this.” 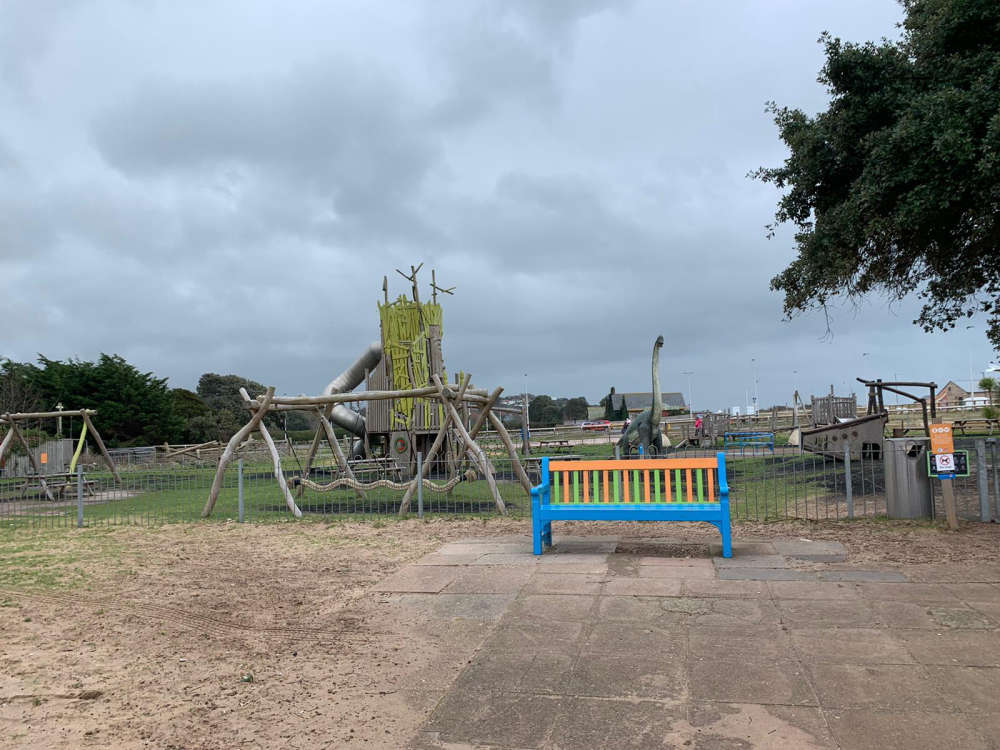 A walk in the play-park (courtesy: Chloe Parkman/LDRS)

THE HISTORY OF QUEEN’S DRIVE

In 2012, plans to redevelop the area between the old lifeboat station and the Maer, known as the Splash Zone, formed part of the Exmouth Masterplan which sets out future regeneration.

The controversial plans divided opinion in 2013 when more than 500 people completed questionnaires. More than half (52 per cent) of respondents  were in favour of the overall proposals, with 41 per cent against.

At the same time, a new action group was launched to ‘save’ Exmouth seafront from developers, with Save Exmouth Seafront concerned that the £18 million redevelopment would mean some of the town’s oldest most popular businesses closing.

In October 2015, the Carriage Café on the seafront left the town. It had been open for nearly 50 years. Around the same time, more than 1,000 residents and visitors took part in the Exmouth Seafront Survey, initiated by Cllr Megan Armstrong. Led by author and analyst Louise MacAllister, the survey aimed to discover if plans for a multi-screen cinema, outdoor water splash zone and adventure golf park were wanted.

Organisers said the survey showed 95 per cent were against the redevelopment, it showed widespread support for the businesses occupying the seafront and that many Exmouth residents felt their concerns regarding the plans had been ignored.

In April 2016, Exmouth residents went to the polls in a referendum. Called by concerned residents, the parish poll saw 4,754 people – 18 per cent of the electorate – take part. Around 95 per cent of participants wanted more consultation.

The summer of 2016 saw Moirai Capital Investments sacked because of the time it had taken for them to develop more plans. September 2016 saw Jungle Fun and Arnold Palmer Putting Course close. Hours earlier, locals and tourists flocked to the attractions for one last round.

In November 2016, campaigners in Exmouth staged a protest march calling for further consultation. Save Exmouth Seafront protesters marched through Imperial Road, The Strand and Alexandra Terrace before finishing on the seafront.

April 2017 saw an application for the seafront redevelopment approved. It meant the council could now go ahead and redevelop a 3.6-hectare swathe of Queen’s Drive, but had no plans to do so. Had the application been rejected, it would have meant the outline permission for redevelopment would have lapsed and sent the project back to the drawing board.

A bid to reprieve the Fun Park from closure failed two weeks later, when East Devon councillors voted 26 to 21 against extending its lease. The contents of the Fun Park were auctioned the following day. The Harbour View café was also due to close at the same time, but its lease was extended.

October 2017 saw an Exeter company, Grenadier, reveal plans for the Watersports Centre, before submitting the formal planning application in February 2018, which was then approved in June 2018.

The temporary attractions for the seafront at the Queen’s Drive Space, which include the food and drink area and the dinosaur-themed play park opened in May 2018. Permission was initially granted for one year, followed by a second permission for a further three years. That expires in March 2022, and the council will not be able to apply for any further temporary use.

Work began at the end of 2018 to realign the Queen’s Drive road, which was completed in June 2019, although questions have been raised about where the funding for the road, which East Devon District Council paid for, actually came from.

At the end of 2019, HemingwayDesign and Lambert Smith Hampton submitted their vision for Phase Three for Exmouth Seafront to East Devon District Council. Suggested uses for the site include a new two storey café/restaurant on the existing Harbour View café site, a mix of playspace (including free play) and open public space on the remainder of the site, and an 60–80 bed, three-to-four star hotel.

In February 2020, East Devon District Council’s cabinet agreed to launch a marketing exercise to identify developer or operator partners. But the council’s scrutiny committee then unanimously agreed that the panel for the purpose of agreeing the selection criteria for the commercial development was not properly balanced, and expressed anger at how they felt Exmouth residents were not being listened to.

That process was delayed by the coronavirus pandemic and a change of administration.

At a meeting of the Queen’s Drive Delivery Group last October, Tim Child, senior property & estates manager, said that it was not usual for a temporary permission to be renewed for a third time unless there are exceptional circumstances regarding why a permanent planning solution cannot be brought forward for the site with a detailed planning application, adding: “If it is not permissible to pursue a further temporary planning application, the council needs to consider what it will do with the site from March 2022 when the site has to close.”

That meeting saw councillors agree and express a desire to ‘Get Seafront Done’, as Cllr Joe Whibley put it, but that as Exmouth is the biggest town in East Devon, it was critically important to the economy and the reputation of the council that they do the right thing and get a scheme that is both popular with the residents and viable in the long term.

While subsequent meetings of the Queen’s Drive Delivery Group have taken place, none have seen the longer term future of Queen’s Drive and Phase 3 discussed in any detail. Their next meeting is scheduled for July 13, with the following meeting on September 7, with the council saying the latter is likely to be when future plans will be discussed.

The ultimate decision over what happens with Phase three will lie with the council’s cabinet.