Hand in your guns 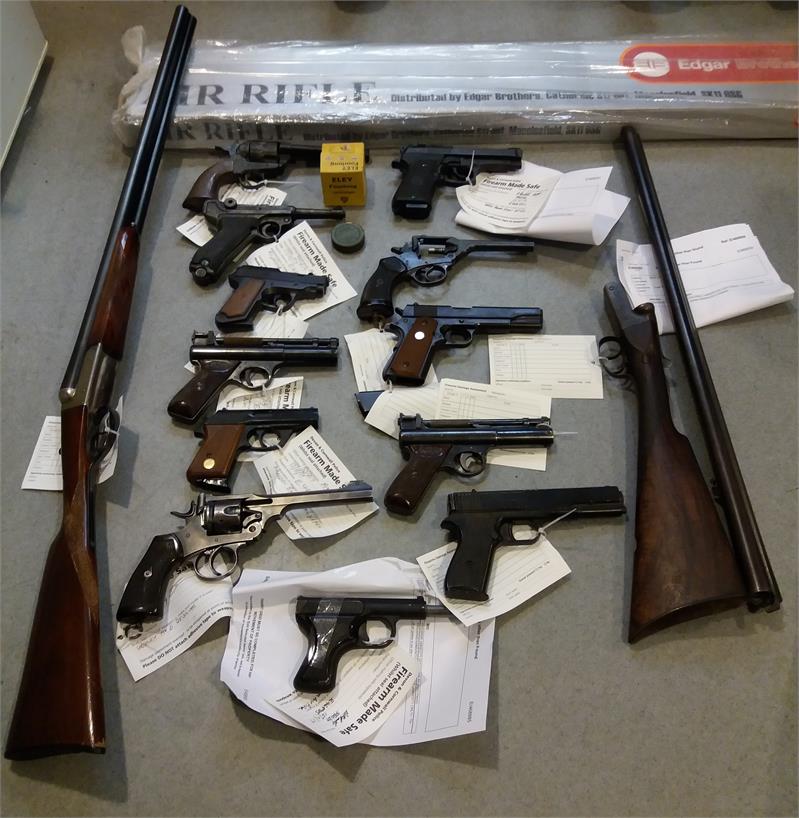 Firearms from a previous amnesty

Devon and Cornwall Police want people to hand in unwanted guns and ammunition during a two-week surrender period lasting until Sunday 29 May.

Police stations in Exeter, Torbay, Plymouth and Barnstaple are among those accepting weapons.

They say many firearms are held in innocence and ignorance of their illegality or are overlooked or forgotten. Examples are shotguns or rifles for which the licence has expired or perhaps handguns brought back into the country from the First and Second World War, or other items acquired as collectibles.

The surrender, organised by the National Ballistics Intelligence Service (NaBIS), gives people the chance to dispose of firearms or ammunition by taking them to a participating local police station and handing them over anonymously at the point of surrender. All firearms will be examined for evidence of criminality.

Surrendering unwanted, unlicensed weapons avoids the risk of them becoming involved in criminality and means that members of the community can dispose of firearms in a safe place. It is important to remember that in past surrenders, the majority of items surrendered were not in circulation for criminal use, and this surrender period removes the possibility that they could be acquired and distributed by criminal networks to harm, threaten and intimidate local communities.

During that period, those surrendering firearms will not face prosecution for the illegal possession upon surrender and can remain anonymous.

Assistant Chief Constable Julie Fielding said “We encourage as many people as possible to hand in weapons and ammunition. If you have information about a weapon or have a weapon being held illegally, now is the opportunity to tell us where it is or to hand it in to a local police station. You can do this anonymously. One weapon out of circulation and off the streets is one less that can be used in crime and to cause harm.”

Police would also be keen for people to hand in any replica guns, airsoft guns, BB guns and anything that looks like the real thing and about which they are having second thoughts, as these can be used to threaten and intimidate too.

The public should also be aware that electrical stun weapons – the police use a version of these called a Taser – can be acquired in other countries but are illegal in the UK. They would like you to hand those in as well.

Any member of the public surrendering a firearm will be doing so in the knowledge that it will be completely destroyed first by being cut into unusable pieces, with metal pieces eventually being recycled. A handful of unusual items may be retained by police force armourers under secure conditions for future training and reference purposes. Nothing will be sold on and nor will the original holders be given any payment.

At the end of the last firearms surrender in August 2019, 119 firearms of various types had been handed in to Devon and Cornwall Police.

If you know of people in possession of or involved in illegal firearms email Devon and Cornwall Police at 101@dc.police.uk or call Crimestoppers anonymously on 0800 555 111.

The following Enquiry Offices are able to receive surrendered firearms and ammunition:

2 – Enquiry Offices open, Monday to Saturday 8am to 6pm – not closed for lunch.