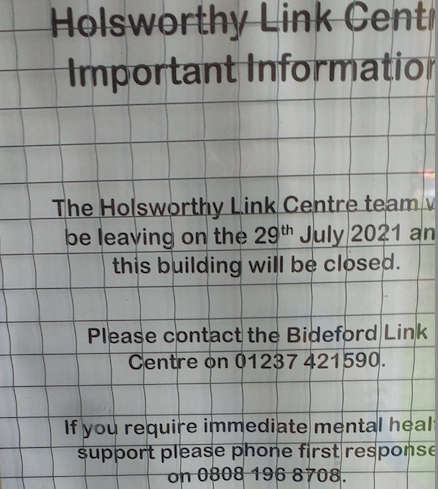 Council says it's because staff left

A mental health drop-in centre in North Devon was closed before a consultation period about its future had started, according to a member of staff who worked there.

Rob Laroche, a cleaner at Holsworthy Link Centre, says he turned up for work on Thursday 29 July this year to find that, with no prior warning, the centre had closed and he had been made redundant. This was weeks before a public consultation about the potential closure of the building had begun.

The Holsworthy Link Centre is one of four mental health support drop-in centres in North Devon. The ‘link centres’, which are also in Bideford, Barnstaple and Ilfracombe, provide day services and drop-in sessions for around 270 people. Devon County Council (DCC) is currently considering closing the centres and shifting its focus to a service operating in the community.

Before making a final decision, the county councul had to carry out the two-phase consultation with service users and stakeholders and consider the feedback. But it appears Holsworthy Link centre was permanently closed on 29 July, more than two weeks before the first phase of this consultation began.

Mr Laroche, 68, had spent three years working for Devon Norse Ltd, a cleaning company contracted by DCC to work in the Holsworthy building. He said he arrived at work one day to find his job gone.

The only notice he says he received from the council was a small print-out placed in the windows in the building.

Mr Laroche said: “I got a message from my line manager telling me not to go back down there. Whether there was something fishy going on I don’t know.”

He says there were lots of black bags and it was clear everyone was permanently moving out.

The building closed to service users at the start of the pandemic with only a few members of staff coming in once or twice a weeh. However, Mr Laroche had still been contracted to clean the building.

When asked why the Holsworthy building had been closed before the consultation period began, Devon Council County said it was because staff members had left the service, and that it would be inappropriate for them to comment on staff departures. They say the closure was not linked to any consultation or proposed redesign of the service.

One campaigner recently described the four-week, virtual feedback 'portal' provided by the council as “woefully short”, adding that many service users did not have enough time to reply.

Critics also say the online-only feedback form deterred service users who didn’t have the necessary IT skills, or, for health reasons, would only feel comfortable sharing things with someone to provide support.

In response to the criticisms, Solveig Wright, deputy head of service for adult commissioning and health at Devon County Council previously said: “Although we were unable to hold public face to face meetings we have still carried out a full engagement and consultation process, following expert legal advice.

“In light of this advice, and the level and quality of feedback received (including some considered alternatives), we will not be looking to extend the consultation period.”